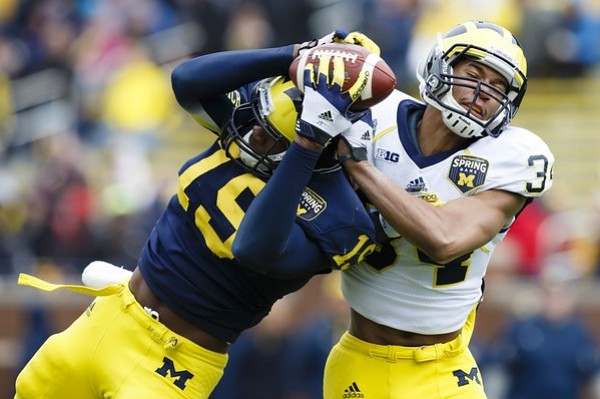 Michigan's 2013 football slate sets up for a fast start. In fact, it?s not crazy to think Michigan could be 6-1 or maybe even 7-0 as it travels Michigan State to begin a run of five November games that shape up to be as tough as any team?s in the nation. It?s nice to have heavies like Notre Dame, Nebraska and Ohio State all coming to Ann Arbor. The November menu features the Wolverines three toughest Legends competitors in a row: at MSU; Nebraska; at Northwestern.

If the Wolverines win the Legends, they will have earned it. Let's take a look at the Michigan schedule in my latest breakdown of each school's 2013 football schedules.

Toughest non-conference game: After opening at home vs. Central Michigan, Notre Dame visits in a primetime game. Enjoy this, as it will be the last time the Fighting Irish are in Ann Arbor for the foreseeable future. The teams will meet in 2014 in South Bend. After that, this storied series will be on hold, as the schools have cancelled meetings from 2015-17. There also is an agreed-upon hiatus from 2018-19. Will ND and Michigan ever meet again? The Fighting Irish won last year, 13-6, ending the Wolverines? three-game winning skein in the series. The last four meetings have been decided by a touchdown or less.

Toughest conference game: Without a doubt, it will be Ohio State?s visit to Ann Arbor on Nov. 30. This could be a preview of the Big Ten title game. The Wolverines have been on the short end of this series lately, dropping eight of the last nine. Michigan did win the last time the game was in Ann Arbor in 2011. Before playing the Buckeyes, the Wolverines must avoid a trap game on Nov. 23 at Iowa, where Michigan has lost the last two times it has visited.

Who they don?t play: This is a mostly bad news proposition. The Wolverines miss Wisconsin-on a three-year Rose Bowl run–which is good. But Michigan won?t play Purdue and Illinois, which is bad.

Easiest game: Akron comes to Michigan on Sept. 14 a week after the Notre Dame game. The Zips don?t figure to be more than a speed bump after going 1-11 overall and 0-8 in the MAC last season in Terry Bowden?s debut season. Hey, at least Akron will be paid well for its beating.

Rugged stretch: November has a lot of heavy lifting-good thing the Wolverines have a bye week before it starts. The month begins with a trip to Michigan State. That?s followed by a visit from Nebraska and then back-to-back road games at Northwestern and at Iowa. Then comes the visit from Ohio State. The Wolverines could lose four or five of these games-or they could win them all.

Interesting factoid: The Wolverines ended the Spartans? four-game winning streak in this hate-filled series last year. Before MSU?s four-win run, Michigan had won 10 of 12 in the series. The teams meet Nov. 2 in East Lansing, where Michigan hasn?t won since 2007. Don?t you feel the tide turning in the Wolverines? favor?

Best chance to be upset: If the thin Nittany Lions-who will have just 65 scholarship players–are healthy, they could dump Michigan when it visits State College on Oct. 12. Penn State could have a nice offense that poses problems for a Wolverine defense that is retooling its front seven. Since it can?t go to a bowl, Penn State relishes opportunities like this vs. marquee foes to prove something. These teams haven?t met since 2010; and the Nittany Lions have won the last three meetings after Michigan ripped off nine victories in succession. In fact, the Wolverines haven?t won in State College since 2006.

Best chance to pull an upset: Honestly, the Wolverines may not be an underdog all season. They may be vs. Notre Dame on Sept. 7 vs. a Fighting Irish squad that figures to have a strong offense but reworked defense. If the Wolverines beat ND, they may be 7-0 entering their bye week on Oct. 26.

Must win: If the Wolverines want to win the Legends Division as they pursue their first Big Ten championship since 2004, they likely will need to beat Nebraska when the Huskers visit on Nov. 9. These figure to be the two best teams in the Legends, as this could serve as a de facto division title game. The teams have split their two Big Ten meetings with each winning at home.

Bye weeks: The spacing here is good. The first bye comes on Sept. 28, after four non-conference games. The second bye comes four weeks later on Oct. 26, allowing Michigan to catch its breath before finishing with five rugged games that begins with a trip to Michigan State.

Here is the Wolverines 2013 schedule: