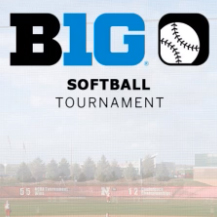 Northwestern 6, Indiana 3: Northwestern starter Amy Letourneau led Northwestern with a 2-for-3 performance including a double, a home run and two runs scored. Andrea DiPrima (two doubles) and Brianna LeBeau (two singles) each went 2-for-3 while Bast drove in two runs to give her a team-best 44 on the year. NU is 31-21 overall on the season while Indiana concludes 2013 with a 19-35 mark. The Wildcats are 21-12 all-time in Big Ten Tournament play. Read more at NUSports.com | Read more at IUHoosiers.com

Ohio State 8, Iowa 4: With the bat of sophomore Shelby Pickett, Ohio State  came back to win, 8-4, against Iowa in the opening round. Pickett launched her first career grand slam in the bottom of the fifth to help the  seed Buckeyes (34-21) advance. Read more at Hawkeyesports.com | Read more at OhioStateBuckeyes.com

Penn State 5, Illinois 2: Freshman pitcher Macy Jones (13-17) picked up her 13th win of the season with her 14th complete game. Jones struck out six batters to reach to 100-strikeout mark in 2013 while allowing just two runs on six hits and did not give up more than one hit in an inning. Pepper Gay received the loss for Illinois while allowing three earned runs on six hits and walking five. Read more at GoPSUsports,.com | Read more at FightingIllini.com

Purdue 8, Michigan State 5:  The Boilermakers put up eight runs on nine hits and an error, including base hits by six different players. Juniors Andie Varsho and Danielle Fletcher along with senior Ashley Courtney had two-hit days. Read more at Purduesports.com.