Who sits atop Dienhart's spring rankings? 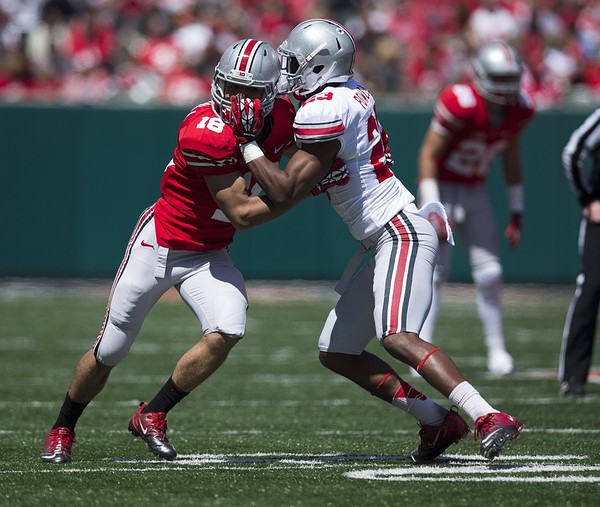 Spring football is over and the offseason is officially here. Let's all let loose with a collective sigh. Now we have to wait until the night of Thursday, August 29, for the first Big Ten game when UNLV plays at Minnesota. There are lots of barbecues, cannon balls into the swimming pool, croquet, Wiffle Ball and Jarts between now and then.

To help get you through, here?s my post-spring ranking of Big Ten football teams. Take a deep breath.

And here we go.

1. Ohio State. There?s a lot to like for the Big Ten?s best hope to win a national title. The offense should be among the best in the Big Ten, led by reigning MVP Braxton Miller. And the defense may be even better despite having to rebuild the front seven. Bottom line: It?s Urban Meyer?s world-and everyone else is just living in it.

2. Nebraska. Any conversation about the 2013 Cornhuskers has to begin with the offense, which will be the Big Ten?s best. The frenetic go-go pace will cause fits. What stands between Nebraska and potential greatness? It?s the defense. How will the overhauled line and linebacking corps look? If the defense comes together, the Huskers may win their first league title since 1999.

3. Michigan. The offense should continue to take flight under QB Devin Gardner, who will allow coordinator Al Borges? offense greater possibilities. The talent on defense finally is catching up the coaching of coordinator Greg Mattison. But some holes loom up front. The Wolverines may be a year away from greatness.

4. Wisconsin. Bret Bielema always said his 2013 team could be special. Well, here we are, but Bielema is shockingly gone to Arkansas. Enter Gary Andersen from Utah State. He?s perfect. Bielema or no Bielema, expect the same results-wins. Lots of wins. The offense will continue to have punch-in-the-nose effectiveness-with a few new wrinkles. Maybe some option? The defense could be among the Big Ten?s best, as it works with a new aggressive mantra out of a 3-4 scheme.

[ RELATED: Look back at all of our posts on Big Ten Spring Football. ]

5. Northwestern. Northwestern almost won the Legends Division last season; it may happen in 2013. This team has more speed, talent and athletic ability than perhaps any Wildcats team-ever. And the players know how to win, coming off a 10-3 season. The offense is star-studded, while the defense finally may be able to win a game if needed.

7. Penn State. After a stunningly successful 8-4 debut, the really hard work begins for Bill O?Brien. The good news: There is plenty of front-line talent in the form of WR Allen Robinson, DE Deion Barnes, TE Jesse James and some touted freshmen. The bad news: Depth is a huge concern, as the Nittany Lions will operate with a scant 65 scholarships-85 is the norm.

8. Minnesota. At his last two stops-Southern Illinois and Northern Illinois–Jerry Kill enjoyed breakouts in his third season. Well, this is Year Three at Minnesota. No team in the Big Ten will be coached better. And that in and of itself may be worth a win or two. The big keys: Can the offensive develop more explosiveness? Can the defensive front seven develop playmakers?

9. Purdue. New coach Darrell Hazell inherits some talent. And that talent will be coached like it never has been before. Job No. 1: Changing attitudes. Job No. 2: Finding a quarterback. The defense could be solid. The offense needs to develop a hard, tough edge that Hazell wants.

10. Indiana. The Hoosiers had a potent offense last year; it may be even stronger this fall with Tre Roberson back from a busted leg. The defense? Eh. Kevin Wilson also has a formula for Indiana to reach its first bowl since 2007: Outscore opponents. It just may work this season for a program on the rise.

11. Iowa. The Hawkeyes need some good news coming off a 4-8 season, the program?s worst since 2000. So, for a second offseason in a row, Kirk Ferentz shook up his staff. There are myriad issues for an offense that was allergic to the forward pass in 2012. The spring offered few reasons for optimism. The defense could be good but not good enough to carry this team. Iowa hasn?t missed the postseason two times in a row since a three-year drought from 1998-2000.

12. Illinois. Here is all you need to know: The Fighting Illini haven?t won a Big Ten game since October 8, 2011. So, it?s 14 league losses in a row and counting for a program with an overhauled coaching staff. This is an equal opportunity team when it comes to areas of concern. Offense. Defense. Special teams. No one is sleeping well in Champaign.

Somehow I'm guessing your list probably doesn't match mine, so now it's your turn. Give me your twelve.