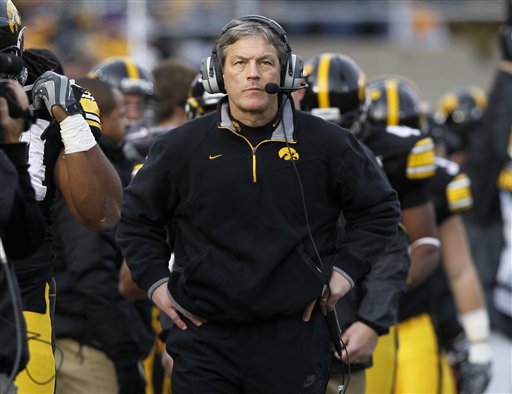 Iowa may be hard-pressed to get bowl eligible coming off a disappointing 4-8 season, the program?s worst since 2000. Keep an eye on the trip to Minnesota on Sept. 28 in the Big Ten opener. This game figures to set the tone. Iowa beat the Golden Gophers and claimed Floyd of Rosedale last season but has lost the last two games in Minneapolis. These are two teams trying to climb over each other in the loaded Legends Division. Iowa?s cross-over games also have gotten appreciably more difficult, as the Hawkeyes have picked up Ohio State and Wisconsin-arguably the two best teams in the Leaders Division.

Bottom line: There?s lots of rough sledding ahead if Iowa wants to avoid missing a bowl for a second season in a row, which hasn't happened since a three-year dryspell from 1998-2000.

Toughest non-conference game: Iowa State has been a pain in Iowa?s keister, winning the last two meetings behind vastly underrated coach Paul Rhoads. In fact, Kirk Ferentz is just 6-8 vs. the Cyclones. This has to stop if the Hawkeyes want to climb out of last year?s 4-8 funk that has some doubting the direction of the program. Iowa hasn?t lost three in a row to Iowa State since dropping five in a succession from 1998-2002.

Toughest Big Ten game: The Hawkeyes travel to Ohio State on Oct. 19. Good thing Iowa will be coming off a bye, as it likely will need the extra prep time. It?s worth noting that Iowa has lost four in a row to the Buckeyes and 12 of the last 13. The lone triumph in that stretch came in 2004, 33-7 in Iowa City.

Who they don?t play: Iowa catches no breaks here, missing Illinois and Indiana. Each figures to be a second-division team in 2013. The Hawkeyes also don?t play Penn State, which may be vulnerable as it operates with just 65 scholarships.

Easiest game: Iowa could use a break coming off a rough 2012. Playing FCS Missouri State should be a welcomed respite from what will be a brutal Big Ten schedule. Cherish this win, Herky.

Rugged stretch: October could be extra scary for Iowa. The month starts with a visit from Michigan State, which is followed by a perfectly placed bye week. After catching their breath, the Hawkeyes go to Ohio State and return home to play Northwestern. Then, Iowa opens November with a visit from Wisconsin. That?s a rough four-game skein. Iowa has to find a way to win at least one of those game.

Interesting factoid: Northwestern has been Iowa?s Kryptonite, winning six of the last eight meetings. The teams meet this season Oct. 26 in Iowa City. But the Hawkeyes are just 1-3 in the last four meetings with the Wildcats in Kinnick Stadium.

Best chance to be upset: Iowa almost lost to Northern Illinois in the season opener last year in Soldier Field, needing a touchdown with less than three minutes left to escape with an 18-17 victory. The Hawkeyes need to be on guard again when they open at home vs. the always-pesky Huskies, who played in the Orange Bowl last season but have a new coach.

Best chance to pull an upset: Iowa beat Michigan three times in a row before falling last season in Ann Arbor, 42-17. So, the Hawkeyes don?t fear the Wolverines. In fact, Iowa is 3-1 vs. Michigan in the last four meetings in Iowa City. And, by the time these teams meet on Nov. 23 in Iowa City, Iowa may have a whole lot on the line. Or maybe not.

Must win: The Hawkeyes may have to scrape to attain bowl eligibility. That means protecting their turf in Kinnick Stadium will be vital. One win Iowa has to have is on Oct. 5, when Michigan State visits. These are two teams coming off of disappointing 2012 seasons. Iowa has had the Spartans? number lately, winning three of the last four and five of seven. It won in East Lansing in double overtime last season. But MSU won the last time it visited Iowa City in 2011.

Bye weeks: These are spread out well. The first bye comes on Oct. 12 after six games. And Iowa likely will need the week off, playing host to Michigan State going into the bye and at Ohio State coming out of the bye. The second bye is Nov. 16, allowing Iowa extra time to prep for two, tough season-ending games: vs. Michigan and at Nebraska.