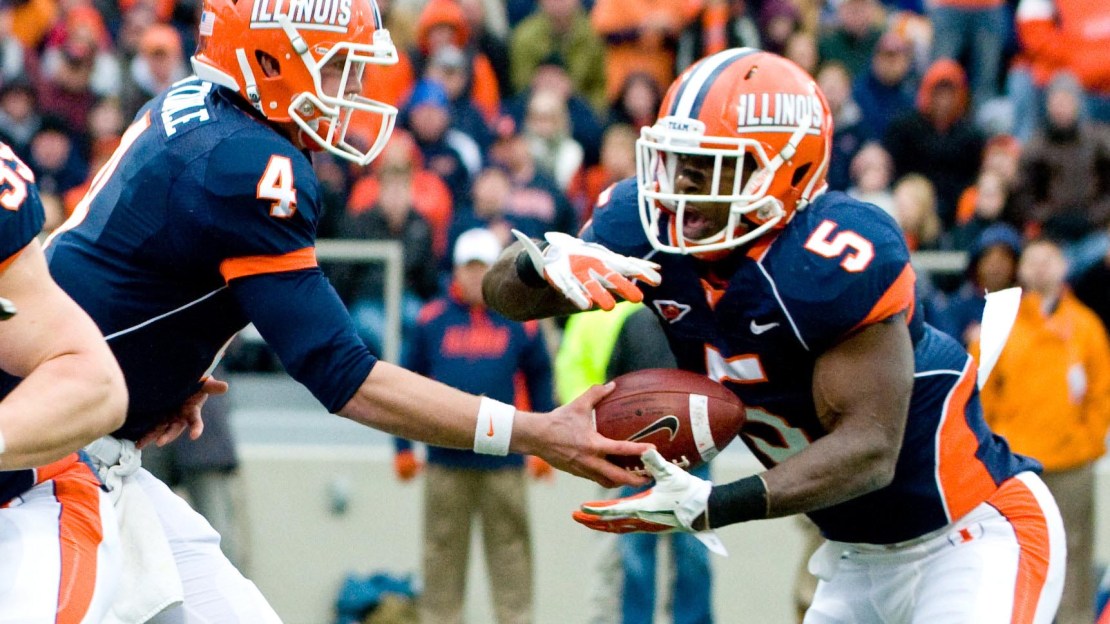 This is a big year for Illinois? Tim Beckman, who shook up his staff after debuting with a 2-10 overall record and going 0-8 in the Big Ten. The schedule is built for a nice start, as six of the first seven contests are home games-including a tilt in Chicago. But it?s November that could make or break the Fighting Illini. Yes, three of the five games are on the road-but three games are winnable: at Indiana; at Purdue; vs. Northwestern. And Illinois needs to cash in if it hopes to play in a bowl.

I'll be looking at every Big Ten team's schedule in the coming days and week, and you can find them all in my Schedule Analysis section.

Toughest non-conference game: The Illini will battle Washington in Chicago?s Soldier Field on Sept. 14 in what is a very challenging non-conference schedule. The Huskies lead the series, 5-4, but the teams haven?t met since 1972, when U-Dub was led by quarterback Sonny Sixkiller and took a 31-11 victory in Seattle. Washington also won in Champaign, 52-14, in 1971. Illinois hasn?t played in the home of the Chicago Bears since dropping a 10-9 decision vs. Washington State in 1994. The lone touchdown in that game came on a 71-yard fumble return by Cougars linebacker Mark Fields. Washington is coming off a disappointing 7-6 season under Steve Sarkisian.

Toughest Big Ten game: When you haven?t won a Big Ten game since Oct. 8, 2011, they all are tough. If you are scoring at home, that?s 14 Big Ten losses in a row. Opening Big Ten play at likely Legends Division favorite Nebraska on Oct. 5 will be difficult. This will be the first time the schools have met since the Cornhuskers joined the Big Ten in 2011. Nebraska has played Illinois 10 times, as the Huskers lead the series 7-2-1.  The last time they played was in 1986, with Nebraska taking a 59-14 triumph in Champaign. Illinois last played in Lincoln in 1985, falling 52-25. Playing host to Big Ten fav Ohio State on Nov. 16 also will be challenging.

Who they don?t play: Michigan; Minnesota; Iowa. Missing the surging Wolverines is good. But Illinois surely would have liked to have played an Iowa team that?s coming off its worst season since 2000 and a Minnesota squad that?s still a work in progress.

Easiest game: A season-opening visit from FCS Southern Illinois is as easy as it?s gonna get. The Salukis went just 6-5 last season, but you know they?ll be fired up to take on the ?state? school. One of Illinois? two victories last season came vs. a FCS foe (Charleston Southern).

Rugged stretch: The first four Big Ten games are brutal. It begins with a trip to Nebraska on Oct. 5 followed by a bye. Next are visits from Wisconsin and Michigan State before wrapping up with a trip to Penn State on Nov. 2. Can Illinois win one of those games? In 2012, Penn State beat Illinois, 35-7 and Wisconsin won, 31-14.

Interesting factoid: Illinois needs to find a way to get the upper hand vs. Northwestern, which visits Champaign in the season finale on Nov. 30. The Fighting Illini have lost three of the last five meetings and seven of the last 10 to their in-state rival. Beckman has made beating NU a point of emphasis.

Best chance to be upset: The Fighting Illini don?t figure to be favored in many games. Southern Illinois could stun Illinois. But Miami (Ohio) of the MAC has a better shot at it when it visits Champaign on Sept. 28. This is one of four non-conference home games for Illinois, which can?t afford many slip-ups if it wants to go bowling.

Best chance to pull an upset: Illinois could ambush Michigan State when the Spartans visit on Oct. 26 in what could be an ugly, low-scoring game vs. two schools with offensive questions. To pull the upset, the Illini will need to score at least one unconventional touchdown (defense/special teams). History is against Illinois, which is 1-11 vs. Michigan State in the last 12 meetings. The Illini?s last win vs. the Spartans in Champaign was 1992.

Must win: If Illinois has any hope of reaching the postseason, it must win as many as it can at home. That means beating Cincinnati of the Big East when the Bearcats visit on Sept. 7. This is a good UC program that has won at least 10 games in five of the past six seasons, but it has a new coach in Tommy Tuberville-the program?s fourth new boss since 2004. Illinois lost at Cincinnati and Brian Kelly in 2009, 49-36.

Bye weeks: Sept. 21 and Oct. 12. These come less than a month apart. Not ideal, as Illinois will play three games-be off-play two games-be off-and then finish with seven games in a row. The Oct. 12 bye comes between the trip to Nebraska and visit from Wisconsin, which is nice.