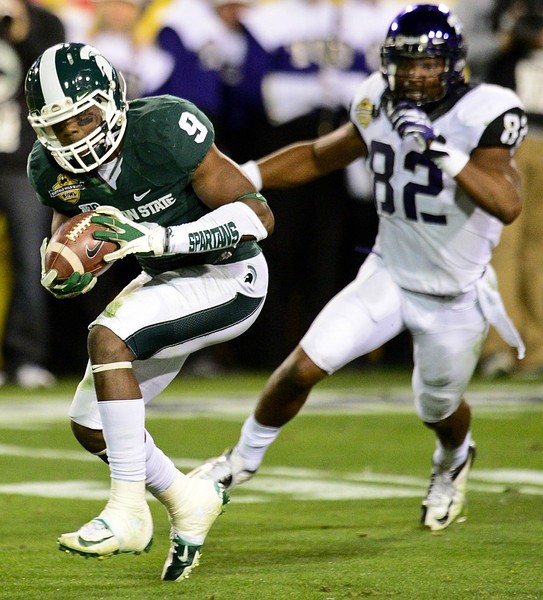 It?s good to be Pat Narduzzi. The Michigan State defensive coordinator has it rolling right now, pushing the buttons on what was the Big Ten?s best defense last season (274.4 ypg) and No. 4 in the nation. In fact, it was the second season in a row the Spartans paced the Big Ten in defense.

Success like that has made Narduzzi a man in demand, as Tennessee and Texas A&M have come after the 47-year-old in recent years to run their defenses. But Narduzzi?s next stop figures to be as a head coach.

I caught up with Narduzzi, who is in his seventh season in East Lansing and added the title of assistant head coach in the offseason, to get his views on his 2013 defense that returns eight starters.

[ RELATED: Check out all of our spring football coverage ]

Q: You have some holes to fill along the line. How does that group looking going into the offseason?
A: I think we will be fine. We lose (end) Will Gholston and (tackle) Anthony Rashad White, two guys who played a lot of football for us. (End) Marcus Rush is back, and he has been a great football player for us. And we get a guy back who played a fifth or fourth of the time last year in (end) Shilique Calhoun. We are really excited about his development and ability to make a lot of plays. You could see that in the TCU game when he made some plays. As a redshirt freshman, he came on in pass-rush situations and he?s a great technician in the run game. He?s gonna be a great football player for us.

Q: The linebackers look every bit as good as last year, right?
A: It should be better, to be honest with you. We really don?t lose a big-time starter. Chris Norman was a starter for us for a long time, but he eventually got beat out. He never got a whole lot better but the other guys did and they passed him. Taiwan Jones came on in the Indiana game. And he played great ever since. He was a little inconsistent here and there. And we have a guy who played some safety in Jairus Jones who will play outside linebacker for us, too. He can do a little bit of both. We are excited about the linebacker spot. Jones and Kurtis Drummond were banging heads last year at safety for six games-and Kurtis was the starter based on what we saw in games. Jairus is a guy good enough to start six games for us last year. He?ll get up to 210 pounds and play outside linebacker for us, too.

Q: Will Isaiah Lewis be a leader in the secondary?
A: He will be a great leader for us. He?s a hitter who will line up with Kurtis Drummond on the hash. Darqueze Dennard will be back. I think he?s one of the best corners in the Big Ten and the country. He?ll be highly sought after following next season. A guy who played for an injured Johnny Adams in the bowl game was Trae Waynes, who had a spectacular spring. And I don?t say that about many guys in the spring. He played a great bowl game vs. TCU and shut down a pretty good receiver-and that carried over to the spring. He has become a very good corner for us.

Q: Why wasn?t corner Johnny Adams drafted?
A: I don?t know. He was an all-conference corner who had great success. Was he a little skinny? A lot of times it comes down to what teams need.

Q: Could this be your best defense since arriving at Michigan State?
A: I don?t know. That?s hard to say. You have to make plays to be that. It could be. It depends on how we start off and how we gel. A lot of it has to do if guys are gonna play as a team or if are they play as individuals who are concerned about going to the (NFL). This certainly could be as good as any defense we have had here. Whether it?s better or not, that?s a steep thing to say.

Q: With a veteran defense, will you install any more complex packages?
A: We will do some different things. We already did some in the spring. A lot of people look at us and say that we are simple but complex. Then I talk to another d-coordinator, and he wondered how we do so much on defense. Sometimes I look at us and think everyone knows what we are going to do. I think we are simple. I don?t know how the opponents look at us, but we are gonna do what we do and have some tweaks here and there for different people and situations.

Q: Have you visited any other schools in the offseason to glean ideas?
A: You always are trying to get some pointers here and there and make yourself better. Sometimes you do, sometimes you don?t. We did make some trips but I don?t want to say where.

Q: Have teams come to see you for ideas?
A: We had a lot more last year come to see us than this year. But I shut it down a little bit because we have to get our work done, too.