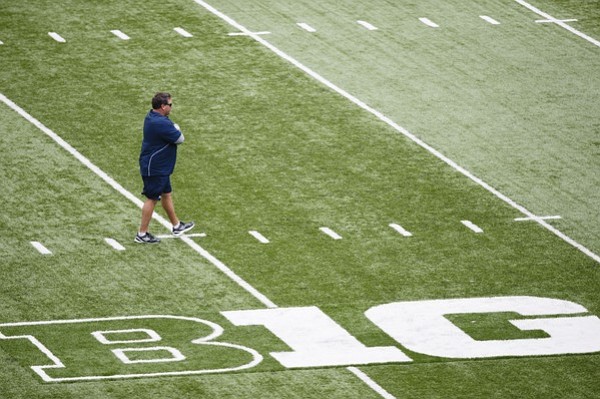 What to do on a cold, wet May day? How about answering some reader mail. Lots of nice emails this week, including a bunch of good questions on the Big Ten Conference's announcement to have new football divisions in 2014. Remember that you can always email me on this page, or find me on Twitter (@BTNTomDienhart). Keep those cards and letters coming, America! And be safe out there.

With the 2014 division changes, when do you anticipate the 2014 Big Ten football schedules being announced?

The Big Ten office tells me that it is working to put together 2014 and 2015 schedules for review by administrators in the next month - not sure when there will be an announcement. Stay tuned.

I consider Purdue to be the third-best team in the Big Ten West. What do you think? – Jeffery

Well, without a doubt, Nebraska and Wisconsin have to be considered the Nos. 1 and 2 schools in the West. That leaves Iowa, Northwestern, Minnesota, Illinois and Purdue. If you are talking about how I would rank the schools historically, I would do it thusly:

If I ranked them on the state of the current programs, it would look like this:

Not a bad list for your All-Spring Team. I like that you used new or younger guys for the most part. I thought Michigan quarterback Devin Gardner was too easy of a choice. I would have included Nebraska linebackers Zaire Anderson or Thomas Brown. – Josh

I was at the Nebraska spring game and came away impressed with the Husker linebackers. It?s a key area on a Nebraska defense that has issues along the front seven. I came away very impressed with these young Huskers linebackers. Jared Afalva may end up being the best of the redshirt freshmen LBs. You mentioned Brown, another one. I also like Michael Rose. And how about sophomore David Santos? Anderson is a former JC transfer who could be good. Too bad he got hurt last season. Bottom line: There is great potential here.

What do you think it will take for Michigan State to recruit like Ohio State and Michigan? – Doug Cowles

Mark Dantonio and his staff do a nice job finding myriad hidden gems. And once on campus, they excel at developing that talent. But to sign the array of blue-chippers that the Wolverines and Buckeyes regularly haul-in, the Spartans likely will need a generation?s worth of success at a VERY high level.

I don?t think recruiting fortunes change radically based on a few good seasons. These things take a LONG time to change-and they often never do. The big brands have been established in college football. And it?s almost impossible to join the club. If you want parity and a level playing field, watch the NFL.

Did the Big Ten consider not splitting into divisions and having the title game be between the first- and second-place teams? The main advantage to this is that everyone gets to play each other as often as possible. Each school could protect three rivalries, which would protect nearly all rivalry games. With a nine-game league schedule, three protected games and six other conference games, each team could play a home-and-home with each school every four years. This set-up would eliminate the competitive balance concern and eliminate the risk of creating a division that looks weaker than the other as we saw in the Big 12 with the North and South that ultimately led to that league's downfall. Was this even considered? – Eric Anderson

Interesting stuff, Eric. You make some compelling points. I?m not sure if having one big 14-team division was considered for football. But the other Big Ten sports will be set up like this, as divisional play is for football only.

Do you see any chance of the B1G moving the Nebraska vs. Wisconsin game to the day after Thanksgiving? (Nebraska and Iowa play in that slot now.) Iowa seems to be trending downward and truthfully doesn't look to have the talent on the roster to turn things around anytime soon. – Nick Push

No, I don?t see that happening. Yes, Iowa is struggling. But programs go in cycles. Plus, Iowa and Nebraska are border states, which helps fuel a rivalry. I like it, frankly. Wisconsin already has rivals in Iowa and Minnesota. This year like last year, the Badgers finish with Penn State-not exactly a rival. How about having Wisconsin-Minnesota play in the final weekend? That would be perfect.

What are the chances of Wisconsin winning the Big Ten championship? And how do the experts view Wisconsin on a yearly basis? – Esteban De Arteaga

The Badgers will be strong contenders this fall, but it will be tough to climb over Ohio State in the Leaders Division. I am concerned about Wisconsin?s offense. Are there enough playmakers at receiver? Is the quarterback situation OK? How will a retooled secondary perform? Most experts always look favorably onto Wisconsin. Since Barry Alvarez arrived in 1990, the program has become one of the most consistently productive in the nation. And I don?t think that will change with Gary Andersen running things.

It is my belief college players should have to spend a minimum of two years in college before leaving for the NBA. Staying for just one year makes a mockery of the college game and recruiting. What are your thoughts? – Joe Hoffman

I can relate to your point of view-and can feel your frustration. But I?d like to go you one better: I?d like to see hoop players have to stay three years, like the football and baseball players do. I agree with your notion that going to college for a year makes a mockery of education. If a guy has to stay three years, he will have likely made nice progress toward a degree, making finishing easier than if he had stayed just one year. Then again, I also think we should consider just letting kids be drafted out of high school. Not everyone has interest in attending college. Why force it?