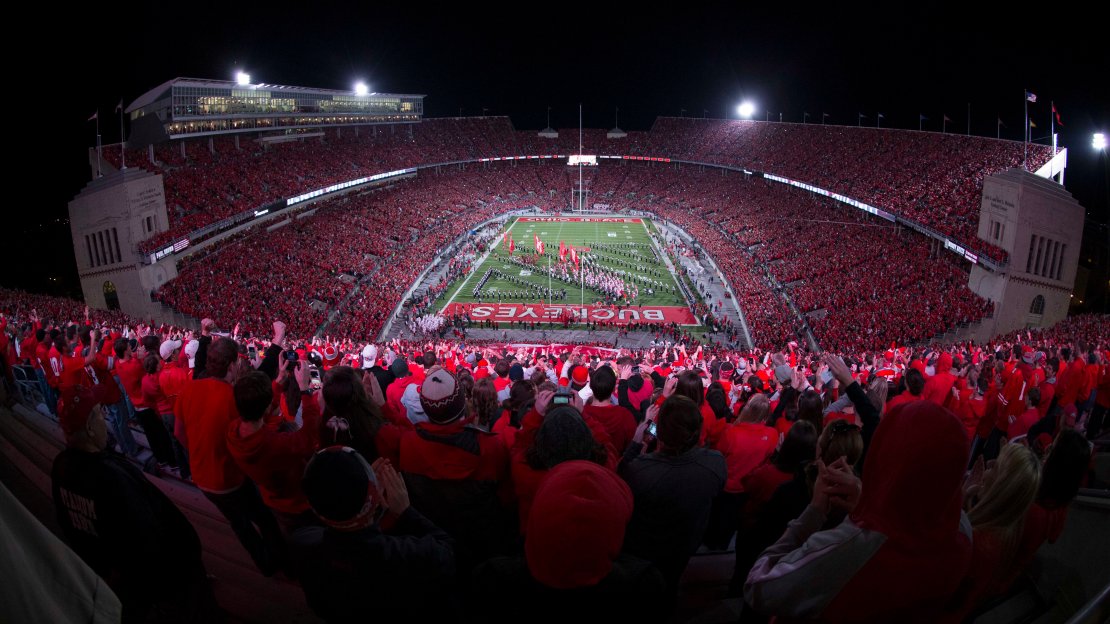 A few days have passed, but the new Big Ten divisional alignment still has some buzzing. Lee Barfknecht of the Omaha World Herald weighs in on the new division splits here. Like everyone else with a pulse, Barfknecht thinks the East will be stronger than the West. And he applies the ?60,000-seat Stadium Syndrome" as more proof.

Barfknecht notes: Nebraska, at 92,000, has the biggest stadium in the West. But the stadiums that rank Nos. 1, 2, 3 and 6 in capacity in the Big Ten are in the East. Nebraska at No. 4 and Wisconsin at No. 5 are the West's biggest.

Also, could playing a weaker schedule impact Nebraska?s strength of schedule to the point where it would hinder its ability to earn a spot in a coming four-team football playoff in 2014? Maybe. But, I still think if a team wins the Big Ten-no matter what division it?s in-it likely will be one of four teams in the playoffs.

No doubt, they would work. And, I think they inevitably will be coming. Jim Delany has said he won?t stand in the way. But before that, how about moving some conference games into September? I think those are coming, too. September can be awfully dreary with a lot of unappealing matchups.

The great David Jones of the Harrisburg Patriot-News wonders if the arrival of Maryland Rutgers in 2014 could challenge Penn State?s recruiting dominance in the East.

Really? I don?t think so. In the last half-century, Penn State has gone a combined 43-1-1 against the two schools. Yes, Maryland and Rutgers have improved and enhanced facilities, but he Penn State brand is awfully powerful and well-established.

Steve Sipple of the Lincoln Journal Star does the unthinkable: He ponders a future without football-and what it would mean to Nebraska?s athletic department. This is scary stuff.

No doubt, the sport has to worry about the future. Are parents gonna let their Little Johnnies play football today? If not, tomorrow could be in peril.

Fearful of injuries with a limited roster, Penn State may do away with its spring game in the future.

"I think you gotta look at it and you can't get your best guys hurt in the spring game," Nittany Lions coach Bill O'Brien said on a recent caravan stop. "I think ? and again, I haven't even talked about this with ? you know, I have bosses, so I'm probably about to get in trouble but, in my mind, I think you've got to think of ways to have a 15th practice, which is what that is and make it a great experience for your fans."

Honestly, will anyone miss it? To call these spring ?games? is a disservice to the word ?game.? Maybe more schools should do away with them and just have a fan-fest/autograph-type event. Call if a ?spring carnival.? That?s basically what some of these spring games have become.

With a nine-game Big Ten schedule coming in 2016, some league schools will have to adjust their non-conference schedule. But Iowa won?t tinker with its game vs. rival Iowa State. Thank god.

However, some in the Iowa camp would like to see the ISU series dropped so the Hawkeyes could play a big-time marquee foe in the non-conference. Still, Kirk Ferentz wants to keep playing the Cyclones. And, I love it. College football doesn?t need to see anymore great rivalries end after already losing Kansas-Missouri, Texas-Texas A&M and Oklahoma-Nebraska.

"That's special. In high school, Ohio State was definitely a place I could have seen myself playing,? Burke said in a recent TV interview in Columbus. ?But now, when I hear people say 'How did he get out of the state of Ohio,' it makes me smirk. But Michigan was the right place for me. I'm glad I had the opportunity to play for the Michigan Wolverines."

Illinois granting naming rights to Assembly Hall is just another sign of the times. Loren Tate of the Champaign News-Gazette says the deal with State Farm will help give the Fighting Illini a top-flight facility. No doubt. And, let?s face it: Assembly Hall needs a face lift.

The only other Big Ten basketball or football venue that has a corporate name is Minnesota?s TCF Bank Stadium. I have to think other schools soon will follow suit. (Sigh.)

If Tim Tebow can't land anywhere else, the Omaha Beef indoor football team have announced they're ready to add him to the team.

My take: This is hilarious. Wait. Maybe it?s not.

If someone can convince me Penn St won't stink the next 7 yrs, I'll agree the #B1G East is noticeably better than West.

My take: I, too, think the Big Ten West may not be getting enough respect.

O'Brien on changing uniforms and helmets: You'll have to come to the games and you'll find out. #PSU

My take: I can?t imagine Penn State will do anything too radically different. It never will be Oregon.

My take: This would have been frightening.