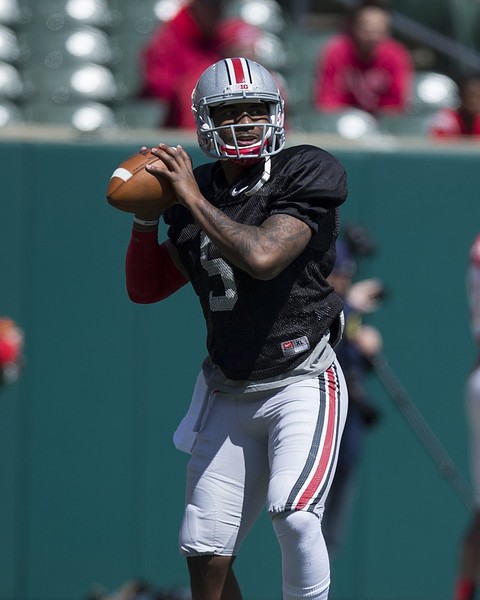 Ohio State quarterback Braxton Miller won the Chicago Tribune Silver Football as league MVP last year as a sophomore. Now, he has improved and could be better than ever-and a legit Heisman contender. ?If Braxton was a 1 on a scale of 1 to 10 when we got here, he finished (last) season around a four,? Buckeye offensive coordinator Tom Herman told Ozone.net. ?By the end of spring ball he was around a six, but the cool thing with him is he could be about a 12.?

Let's get on to some more links …

Point: You could make a strong case that Iowa looks better on paper at most positions compared to last season. Most of the 15 returning starters had little to no starting experience heading into last season, while now they have a year of playing extensively from which to build.

Counterpoint: Iowa could have a better team but still finish with a similar record to last season because of the upgrade in schedule, which includes Ohio State and Wisconsin replacing Indiana and Penn State.

Illinois offensive coordinator Bill Cubit spent time the past two months showing quarterback Nathan Scheelhaase how to be a coach, which he?ll need to be this summer along with fellow signal-caller Reilly O?Toole when the coaches can?t supervise workouts. But, golly, Scheelhaase is learning his fourth offensive system in five years. Is he equipped to teach this new scheme already?

Oh, and Scheelhaase will get married this summer, too.

Purdue wants to do all it can to maintain its rivalry with Notre Dame, as the schools have played each season since 1946. But the series will need to be tweaked if the Boilermakers want to have seven-home games when the Big Ten expands its conference slate to nine games in 2016.

The league?s future home-and-away format doesn?t match up with the Notre Dame series rotation in order for Purdue to maintain seven games at Ross-Ade Stadium it needs for budget purposes. In 2016 and even-numbered years, Purdue will play four home conference games and is scheduled to face the Fighting Irish in South Bend. That leaves the Boilermakers one home game short every other season starting in 2016.

No doubt, Indiana will have its worked cut out for it in the new East Division. Terry Hutchens of the Indianapolis Star has some good observations on the subject.

Hutchens cuts straight to the truth with this statement: The truth is, beyond putting the top seven teams in one division and the bottom seven in the other division in terms of perceived annual strength, Indiana was going to find itself in a less than desirable position based on its performance over the last 20 years.

The ABC/ESPN/ESPN2 family announced which Big Ten games it will televise at night this fall.

Ohio State leads the way with three night kicks. Get used to it, Buckeyes fans, as Urban Meyer loves the late kickoffs and wants them to be a regular occurrence.

By the way: Did you notice that Nebraska-the likely Legends Division fav–has no night kickoff games? This is unfortunate.

No doubt, Michigan State is pumped to have Adreian Payne back for his senior season. And, Payne will be pleased to know that Tom Izzo plans to feature him in the offense, like he did for Draymond Green during his senior season.

?He?s got to be a go-to guy,? Izzo told the Lansing State Journal, ?because of the way he can score inside and outside.?

And Payne?s return makes the Big Ten the Spartans? World. Everyone else is just living in it, says the great Mike Hlas of the Cedar Rapids Gazette.

The great Jason King ESPN.com came out recently with his early top 25. And, colleague Adam Katz has answered. Michigan State is No. 3; Michigan is No. 9; Ohio State is No. 15; Wisconsin is No. 25. No Iowa? No Indiana? Hmmmm.

If higher salaries means better performance, than Minnesota?s hoop team should be better. It says here that Richard Pitino?s assistants all will be paid more than Tubby Smith?s highest paid assistant.

Michigan point guard Spike Albrecht shocked the world with his performance in the national championship game when he scored 17 points in the first half. But was he a one-hit wonder?

I say ?no.? If the spunky Albrecht can perform like that on that huge stage vs. a foe like Louisville, you know he can do it on a Tuesday night in February at, say, Champaign, Ill. Just give him the opportunity, Coach Beilein.

My take: Save the dates.

My take: Coincidence? Of course not, silly.

Looks like Ross-Ade Stadium has a new name courtesy of new coach Darrell Hazell — "The Furnace."