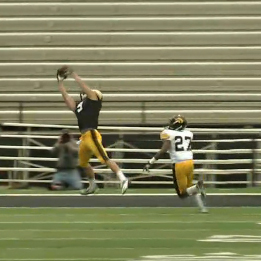 Iowa had a lot of work to do in spring drills coming off a 4-8 season that was the program?s worst since 2000. The offense, which struggled mightily last season and had just seven touchdown passes, may have turned a corner this spring under second-year coordinator Greg Davis. No doubt, the offense looked good in the spring game. The defense also may have found a playmaker up front.

1. The Iowa defense finished last in the Big Ten in sacks and tackles for loss last season. Playmakers are needed. One may have emerged in Carl Davis, a spring game star along the line. He had three sacks and knocked down two passes. The 6-5, 310-pounder was a flat-out stud. Could he be the next Christian Ballard, Karl Klug or Adrian Clayborn? Hmmm.

2. The often-maligned running back corps may be a real strength this season. Jordan Canzeri, who hurt his knee last year and missed 2012, looked good in the spring game, running 13 times for 50 yards and catching three passes for 56. He had a nice 29-yard run to set up a score and nabbed a 46-yard touchdown pass. Mike Malloy also turned some heads, running 12 times for 61 yards and a score after missing his freshman season with a knee injury. Oh, and Mark Weisman and Damon Bullock are back, too.

3. The three-man quarterback battle between Jake Rudock, Cody Sokol and C.J. Beathard continues, as the trio ran a no-huddle attack throughout the game. The quick pace was fun. Rudock hit 16-of-27 passes for 160 yards; Sokol hit 15-of-20 for 185 with a TD; Beathard hit 11-of-19 for 187 with a score. Kirk Ferentz says a starter likely won?t be tabbed until the week of the opener.

4. The receivers came into the spring on the spot. Many looked good. The star was Cameron Wilson, a redshirt freshman who wasn?t even on the two-deep. He had 10 grabs for 133 yards. Kevonte Martin-Manley had five catches for 42 yards. He must be a leader. Jacob Hillyer had four grabs; Blake Haluska had four catches. Stay tuned. Work must continue on this critical unit. Newcomers could help, too.

5. Continue to keep an eye on safeties Nico Law and John Lowdermilk. This is a position that must settle. Law may not be healthy; Lowdermilk was a bit spotty. B.J. Lowery and Jordan Lomax had their moments at corner. The secondary could be OK.