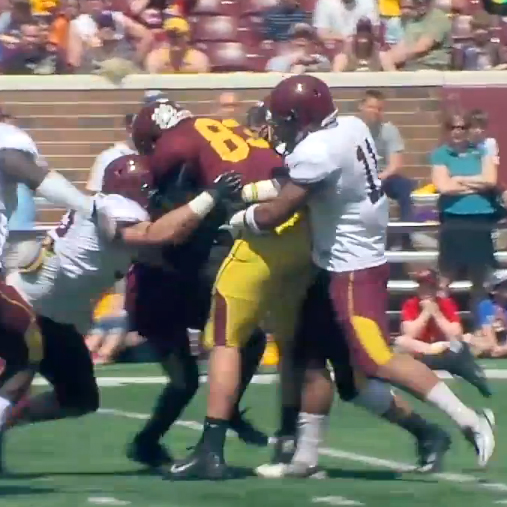 Minnesota officially is pointed toward Year Three under Jerry Kill, putting a cap on spring drills with a game today. The team showed improvement from its first year under Kill to last season. The 2013 season could be the best yet, as it looks to pass better and make more big plays on offense, while tightening up the run defense.

Here are some observations from the spring game.

1. The Gophers passing game needed work. We saw some of that today. Philip Nelson got a baptism by fire last season as a true freshman and continued to take strides in the spring. He had some nice passes today, as the offense wants to move away from myriad quarterback runs. At one point today, Nelson was 10-of-10, as he basically solidified his status as the No. 1 guy. He finished 10-of-13 for 119 yards, while running 12 times for 16 yards. Mitch Leidner looked good, too, at one point rolling left and tossing a nice 39-yard scoring strike. He hit 13-of-17 passes for 179 yards and ran for 32 yards.

2. It?s vital playmakers emerge at receiver. Derek Engel and Isaac Fruechte showed why they should be steady forces, as Engel had a nice 39-yard catch at one point. But neither is overly dynamic as far as stretching the field. Devin Crawford-Tufts and Jamel Harbison, who is coming off a knee injury that ruined what looked like it was going to be a nice freshman season. After the game, Harbison said his knee was fine. That is great news, as he made some nice catches today. He could be special. Freshman tight end Maxx Williams impressed with three catches for 54 yards. Drew Goodger had a nice 21-yard grab. He is a good tight end looking to build on a solid 2012.

3. The offensive line developed depth out of necessity last season, when injuries struck. We saw some of that depth on display today. This could be a very good unit under line coach and OC Matt Limegrover. The first unit looked very good at times.

4. The defensive line needs some playmakers with end D.L. Wilhite gone. Theiren Cockran turned some heads coming off the edge with two sacks. He?s a rangy player who has a nice first step. Keep an eye on him. The linebacking unit also is being reworked with players like Keanon Cooper gone, so it was nice to see early JC arrival Damien Wilson make a team-high six tackles.

5. The running back showed off its depth today. Rodrick Williams and Donnell Kirkwood each took turns carrying the ball. Kirkwood ran hard and scored a couple of touchdowns. He showed why he is the bell cow at this spot, but the unit could use some more wiggle. Cole Banham, a transfer from Mankato State, brings some spunk to the position.

6. The kicking continues to be a worry. Early on, Chris Hawthorne missed a 40-yard field goal. This has to improve.