When does Denard Robinson get drafted? 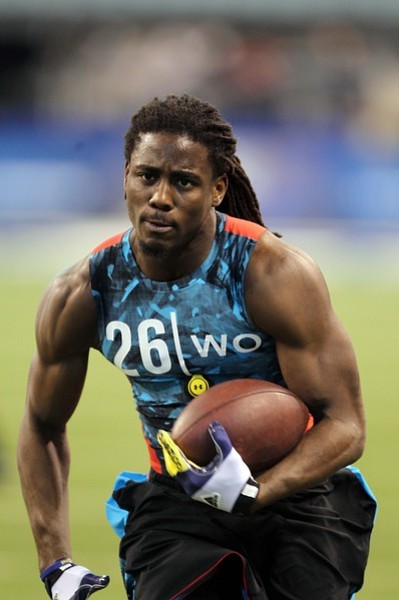 The college football season has been over for months, but Michigan?s Denard Robinson still seemingly always is the headlines. Whether it?s being on the cover of a video game or throwing out a horrible first pitch at a Detroit Tigers game, America just can?t get enough of the electric ?Shoelace? and his flowing dreadlocks. Now, he?s officially set to become a professional as the NFL draft begins today.

Robinson won?t hear his name tonight when the first round takes place, and he likely will have to wait for Friday's second and third rounds. There's a chance he may hear his cellphone ring with an NFL team bearing good news until Saturday's rounds four through seven.

It?s true: A look at some mock drafts reveals the Michigan legend could go anywhere from the third to the seventh round.

The reason for the skepticism is Robinson?s move from college quarterback to receiver/return man in the NFL. He saw some action at receiver the latter half of 2012 after he endured a right elbow injury at Nebraska on Oct. 28 that basically ended his quarterbacking days. Robinson caught just three passes for 31 yards. And he didn?t return a punt or kickoff last year. Can Robinson REALLY make the transition?

His durability causes more concern. The 5-11, 197-pound Robinson was dinged up time and again at Michigan en route to running for 4,495 career yards (the most ever by a quarterback in NCAA annals) and 42 touchdowns and passing for passing for 6,250 career yards and 49 touchdowns.

Still, Robinson?s jet-setting speed and slippery moves make him an intriguing prospect who merits a draft pick. And other former college quarterbacks recently have enjoyed success in the NFL after making the switch to receiver/return man/running back:

Here?s a look at where Robinson is projected to be selected in various mock drafts.

"This draft is extremely light on players who scare defenses with the ball in their hands, and Robinson is an interesting guy to experiment with," Kiper wrote. "Offensive coordinator Jay Gruden can find ways to get him the ball."

The NFL Network: Fifth round to Cleveland Browns

DraftTek.com: Sixth round to Falcons

So where does Robinson go, and what do you expect from him when he gets there? You tell us.