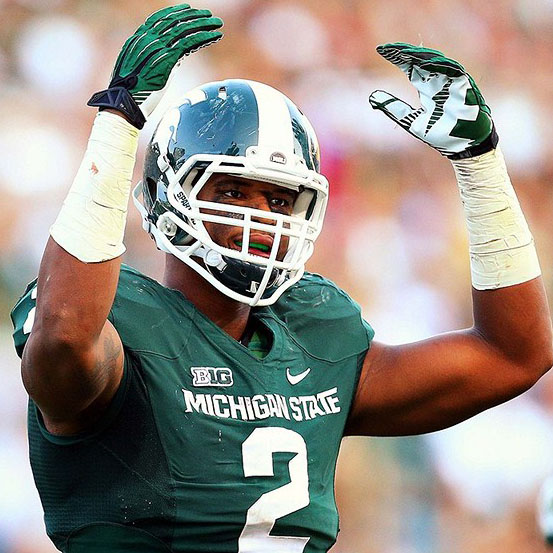 The NFL draft is here. Hallelujah! But, Thursday night?s opening round may not be a joyous occasion for the Big Ten. In fact, the league may not have a first-round choice for the first time since-are you sitting down?–1953. Gulp. Yes, that?s 60 years.

The SEC? It will have lots of first-rounders. Alabama may have four first-round selections alone-and the SEC could have 12. Alas, if Michigan offensive tackle Taylor Lewan had opted to turn pro, don?t you think he likely would have been a first-round pick. Sure he would have been. Most had him going mid-first-round.

Despite the gloom, Brian Christopherson of the Lincoln Journal Star notes that the Big Ten has more than held its own in recent drafts. Since 2000, the conference has produced the second-most draft picks (455) behind the SEC (528). So there.

Also consider last year?s draft: The Big Ten had 41 players selected, just one behind the SEC. The next-closest conference was the ACC, with 31 picks.

Count Michigan among the Big Ten schools that probably will be bumming out during the draft. The Wolverines don?t figure to have a first-round pick for a third year in a row. Such a skein hasn?t happened in 23 years.

Kyle Meinke of AnnArbor.com.com notes it could be worse: The Wolverines may have just one player picked, which hasn?t happened since 1994 when WR Derrick Alexander was the lone selection. If just one Wolverine is selected, the program will have sent just six players into the past three drafts, something that hasn't happened since 1938-40. Let?s blame it on the Rich Rodriguez regime and subsequent fallout. Sounds good.

There is a lot to like about Michigan State defensive end William Gholston, beginning with his massive size: 6-7, 280. Still, the mercurial Gholston likely won?t be selected until the third round. Why? He just doesn?t play hard all of the time and is coming off a disappointing junior season.

As a side note, it?s interesting that Gholston was asked at the Combine by a team: Why didn?t you go to Michigan? ?I didn?t need to give him an answer,? Gholston told the Lansing State Journal. ?There?s no need to respond to that question.?

Here is an exhaustive look at where Wisconsin players may be selected in myriad mock drafts. Thank you, Dave Heller. Remember when Gil Brandt had Montee Ball as a first-round pick? No more.

Penn State sophomore-to-be QB Steven Bench was told he wouldn?t receive anymore first-team reps. So, it?s easy to see why he opted to transfer. Audrey Snyder of the Harrisburg Patriot-News caught up with Bench to get details on his decision to bolt State College, Pa.

Now, the Penn State quarterback derby will come down to JC transfer Tyler Ferguson and incoming freshman Christian Hackenberg. C?mon. We all know who is gonna win this job. Let?s not kid ourselves.

The great Bob Flounders of the Harrisburg Patriot-News picks a "Penn State?s all-time defensive players drafted" team. Got that? He selected an offensive team on Wednesday. How many flat-out monster studs have matriculated through Happy Valley? Incredible, isn?t it?

Some nice video here of Iowa offensive coordinator Greg Davis talking about the quarterback derby, among other things. The Hawkeyes spring game is this Saturday. Don?t just focus on the offense. The defense also has issues-who is gonna make TFLs and sacks? The line has questions.

Speaking of Iowa, the Hawkeyes may only have corner Micah Hyde picked in the draft. Yes, that?s it. The Hawkeyes had six picks in each of the last three drafts.

Who is the best dressed college basketball assistant coach? It?s Michigan?s Bacari Alexander. I know you were dying to discover this.

Sandi Marcius announced not long ago that he will leave Purdue and play his fifth and final season elsewhere, even though he finished the season playing very well and was wanted back by Matt Painter. In order to transfer and play next season, Marcius needs to graduate. But he?s two classes short.

He planned to take those this summer-but Purdue isn?t paying for them because Marcius bolted on his own. Makes sense, right? Not to some, who think Purdue is being unfair. Purdue says Marcius is welcomed back. And, if he stays, the school will pick up his tuition bill. But why should Purdue pay for a kid to finish his degree so he then can go play somewhere else?

?We don?t think Sandi is miserable here, and we?re not miserable with Sandi,? Purdue A.D. Morgan Burke told the Lafayette Journal Courier. ?I am still hopeful. We?ve said he can get a release to look around. We?re not going to be harsh in that regard. If that is the option he selects, then he has to be willing to pick up the (financial) responsibility for the (summer) classes.?

So will the teams that play in the College Football Playoff still get a bowl experience and take a 7 day trip to prepare the game?

My take: This is a good question. I hate to see student-athletes miss out on the chance to have a pie eating contest or dance-off.

Am I the only one still amazed Maurice Creek still has eligibility left?! Hopefully he lands somewhere and gets to play, tough road for him

I've got people telling me Payne announced his return and others saying he missed a final. Here's what I know: He hasn't announced a thing.

My take: The deadline is April 28, this Sunday.

Steven Bench's father had good things to say about Bill O'Brien. Said his son "wants to go somewhere he can compete and be the starting QB."

My take: Maybe he can go to Georgia State or Georgia Southern.

The whole QB separation thing could be coach speak. Long way to go. No need for quick decision. Keeps it competitive

My take: I agree. Still, wouldn?t it be nice to have leader/projected starter that teammates could start to look to and build around over the summer?

My take: This will be a young Indiana team next season. But, it still will be very good.