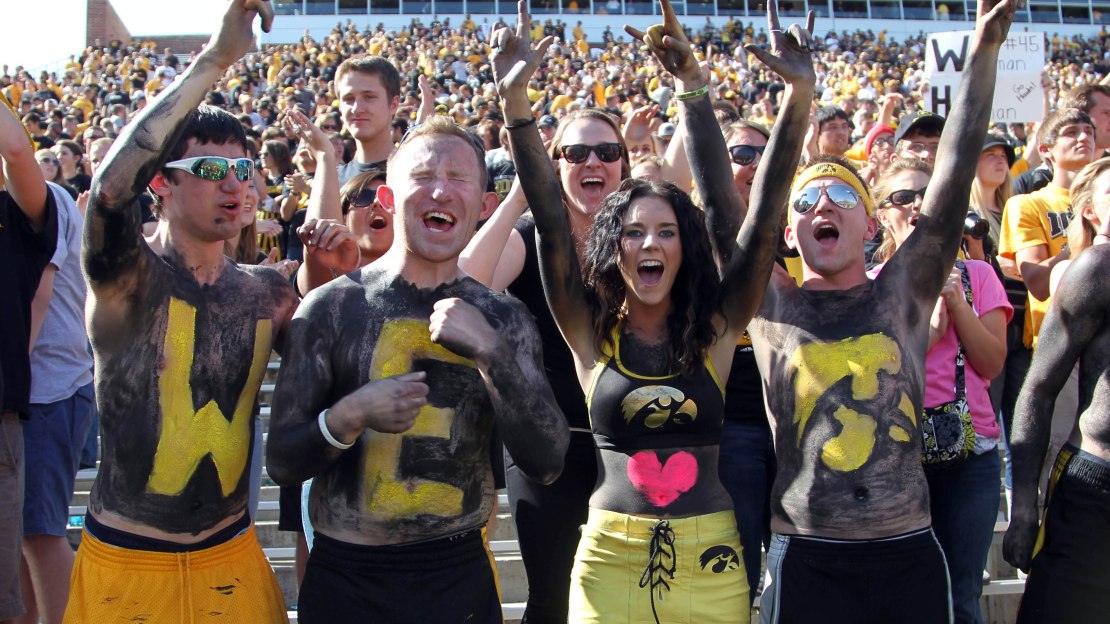 Iowa has produced some great offensive linemen under Kirk Ferentz. In fact, since 2003, 13 Hawkeye offensive linemen have been drafted-guys like Robert Gallery, Bryan Bulaga and Riley Reiff, among others. Who is the next great one? Check out tackle Brandon Scherff. In fact, I wonder if Scherff may be Iowa?s most talented player on offense. Think about it.

Graham Couch of the Lansing State Journal has three Michigan State storylines to watch-beyond the obvious intrigue at quarterback.

No doubt, the DeAnthony Arnett narrative at wideout is interesting. And I am stoked to see Lawrence Thomas inside at defensive tackle; he could be the next Jerel Worthy. But I?m just not buying Riley Bullough at running back. Nope. If he REALLY is Michigan State?s every-down running back, the Spartans are in trouble. I think in the end a freshman like Gerald Holmes or Delton Williams may win this job.

[RELATED: Our top stories of the week. ]

Speaking of MSU, Mike Griffith has a report card on the Spartans spring game. It?s a mixed bag. Sorta like my report cards back in the day.

Mark Dantonio will like the grade he and his cohorts received. The secondary, receivers and running backs have work to do. Two words: summer school.

Former Minnesota quarterback MarQueis Gray had his ups and downs playing under center. But, if he?s gonna play on Sundays, it won?t be as a quarterback. It?ll be as a tight end.

He could make the move. Gray has extensive experience as a receiver at Minnesota. And he no doubt has the size (6-4, 240) to play the role. But is he physical enough at the point of attack? Can he block?

The great Ben Jones of StateCollege.com has five performances from Penn State?s spring game you may have overlooked.

I am interested to see more of redshirt freshman DT Austin Johnson. The big fella could be a horse on the interior with Jordan Hill gone. DE Evan Schwan could be a force off the edge as a rusher. I really like this Nittany Lions team. If it stays healthy and gets solid quarterback play, another very good season looms.

Michigan A.D. David Brandon wants John Beilein to be the head coach of Michigan for a long time. A REALLY long time. In fact, he never wants him to leave.

Why not? Beilein has gone 76-32 the past three seasons with a trip to the national championship game this past season. He also led the Wolverines to a share of the Big Ten title in 2011-12. Yes, this has become a fairy tale marriage.

The great Loren Tate of the Champaign News-Gazette has a whimsical column that looks at a number of different subjects. Lots of good random thoughts. Among them: Tate?s spies tell him Seton Hall transfer Aaron Cosby will be a good addition to the Fighting Illini. Who knew Tate had spies?

The ACC seemingly may have shut the door on any conference raiders with a ?grant of rights? agreement announced Monday. Basically, the ACC schools huddled together, shivering and exchanging nervous glances as they agreed that should any school leave it would forfeit its media loot back to the ACC for years to come. OK.

Lee Barfknecht of the Omaha World-Herald takes a stand similar to mine: This agreement won?t stop anyone from doing anything that it wants. And, this ?grant of rights? thing-a-ma-jig is hardly revolutionary. The Big Ten, Big 12 and Pac-12 have similar agreements. To wit: Barfknecht quoted one source thusly: ?Do you really think Texas would sign up for something it couldn?t get out of? ?

Oh, and count Tom Shatel of the Omaha paper among those who also believes this media rights agreement may be as flimsy as the paper it?s written on.

Brandon told me last fall that student no-shows "a trend" nationally. Said it was becoming difficult to deal with no-shows and late arrivals

Ranking all 120+ BCS coaches in order cracks me up. To do any real justice to it, you'd have to do a lot of intensive research.

My take: Having done it before, I will say: It?s HIGHLY unscientific.

OSU right tackle Reid Fragel told me his workout today with the Bengals went "awesome." His draft stock continues to be on the rise.

My take: He?s a big, athletic former tight end whose best blocking days are ahead of him. He only has played O-line for a season.

Big Ten's Scott Chipman informs me ACC/Big Ten Challenge matchups should be known in mid to late May.

My take: Mark your calendars.