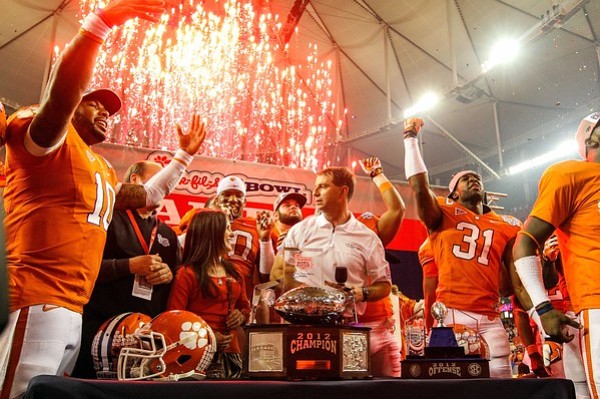 Every ACC school approved the measure, which is considered to be even more of a deterrent than an exit fee.

"This announcement further highlights the continued solidarity and commitment by our member institutions," ACC commissioner John Swofford said in a statement. "The Council of Presidents has shown tremendous leadership in insuring the ACC is extremely well positioned with unlimited potential."

Long-time ACC scribe David Teel of the Newport News (Va.) Daily Press estimates that if a school left the ACC now in this 14-year window between now and when the rights agreement expires with the current TV pact (2026-27), it would forfeit about $300 million.

So let's do math. If #ACC grant of rights is 15 years, a school leaving the league would forfeit about $300 million.

According to various reports, the Big Ten, Big 12 and Pac-12 have similar agreements. The SEC does not.

Of course, a grant of rights could be challenged in court. If there is one thing leagues and universities have a lot of, it?s lawyers to help them get what they want.

And, if I have learned one thing in life, it's that if someone or something REALLY wants to do something, it will find a way to do it-legal agreements or no legal agreements.

But, at least for now, a sigh of relief is being uttered in ACC country. This move appears to stabilize an ACC that looks the most vulnerable for poaching among the major conferences, now that the Big East has been picked apart, blown up and put back together again as a glorified Conference USA.

The Big Ten, SEC and Pac-12 aren?t in danger of losing schools. The Big 12 may have some vulnerability. The ACC? It?s primed for poaching in an ever-changing conference landscape. It?s all about increasing your TV footprint. And leagues with strong football programs and strong football histories largely are calling the shots. That?s bad news for the ACC, traditionally a basketball league with weak football.

Maryland recently announced it was jumping the ACC?s ship for the Big Ten in 2014 and must pay a $52 million exit fee. A legal battle rages over that. And speculation swirls that ACC schools North Carolina, Georgia Tech, Duke, Clemson, Virginia and Florida State are possible targets of other conferences looking to bolster their ranks, as momentum seemingly builds toward 16-team super conferences.

Will this ACC rights agreement really protect it-or any other league? Stay tuned.