Dienhart: What to make of PSU QB situation? 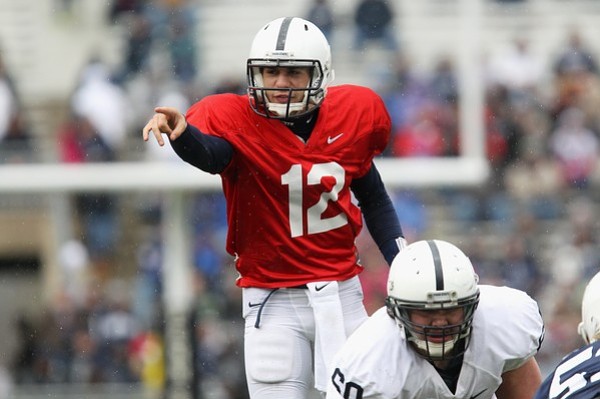 Penn State took its next steps forward in Year Two under Bill O?Brien. In the spring game, there were signs of many things to build on going forward, including a strong offensive line, nice collection of skill players on offense and a veteran secondary. Here are some observations from today?s spring game.

1. Don?t know how much to read into the quarterback situation. Steven Bench and Tyler Ferguson had their moments in what Bill O?Brien has called an even quarterback race. On this day, neither Bench nor Ferguson was overly impressive. Each hit 9-of-15 passes. Bench threw for 99 yards and a score; Ferguson threw for 90 yards and two touchdowns. Honestly, until hot-shot recruit Christian Hackenberg arrives in the summer, the quarterback situation remains fluid.

2. The offensive line looked good, which wasn?t a shock. This unit should be very good-even with two starters gone. Ty Howle will be just fine at center. And Adam Gress will hold his own at right tackle. Left tackle Donovan Smith could be a future star.

3. There is excitement about some of the players who redshirted. And no two players offer more buzz than receiver Eugene Lewis and running back Akeel Lynch, who had 76 yards rushing at halftime. Kid is gonna be good. Another redshirt freshman to continue to watch is linebacker Nyeem Wartman. By all accounts, he should play a key role for a corps that has lost Gerald Hodges and Michael Mauti. Coaches have a pretty good idea what they have in Glenn Carson and Mike Hull at linebacker. Bottom line: Linebacker U should keep on ticking away.

4. The defense has some big questions, beginning with having a new coordinator in John Butler. Because of better depth in the secondary, look for Butler to employ more nickel and multi-defensive back schemes. Will Butler be as aggressive as predecessor Ted Roof, who left to run the defense at his alma mater Georgia Tech? Dunno just yet. But, I would doubt it. We didn?t see much today, as schemes on both sides of the ball were a bit generic.

5. Defensive end Deion Barnes is a star-already. But staffers need a bookend for Barnes. Anthony Zettel, Brad Bars and C.J. Olaniyan all took turns on Saturday, with each flashing some potential. Speaking of potential, how about tackle DaQuan Jones? He was out today with a bad back but he could be a real anchor and force on the inside with Jordan Hill gone.

6. Sam Ficken was 14-of-21 on field goals last season, struggling mightily early in the season. He came on down the stretch and closed out hitting his last 10 field goals and the winner vs. Wisconsin. Alas, Ficken missed a 37-yard field-goal attempt (his only of the game) late in the first half today. He also missed a PAT in the fourth quarter. Was this just a blip?

7. How many great tight ends does this program have? Jesse James looked good today, grabbing a TD pass early. Other tight ends are Kyle Carter, Matt Lehman and true freshman Adam Breneman. Look for O?Brien and Co., to continue to make liberal use of these formidable weapons.