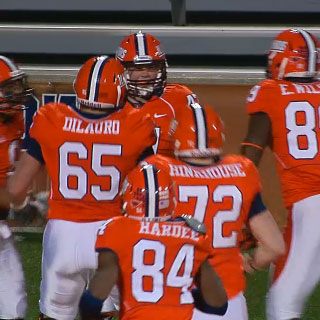 Cubit, 59, is a sage offensive mind who most was head coach the last eight seasons at Western Michigan, where he went 51-47 overall and 36-27 in the MAC with three bowl trips. In fact, his 2008 team beat Illinois. And in 2007, Cubit coached Western Michigan by Iowa in the regular-season finale. The loss kept the Hawkeyes out of a bowl game after a six-season run.

Q: What do you like about quarterbacks Nathan Scheelhaase and Reilly O?Toole?

A: They are both pretty smart. This system is pretty complicated. They struggled a bit early. We knew it was gonna be a long haul. But they picked it up. Now, it?s a matter of if we can get it done talent-wise. Both of them got better in their technique. I?m not saying it was poor, but it wasn?t very pretty.

I thought Nate was throwing the ball a lot faster. I thought in the spring game, he did a good job of getting the ball out with a little bit more arm strength. Route-running was not a big priority here. I think we made some grounds in the passing game and in knowing concepts.

Q: How is the line coming together?

A: I think the line got a bad rap. The style of offense last year was a lot of east and west. I don?t think the personnel was good for that. Our backs are more north-south guys, so I think we?ll be better. That will help the line. I also think the quarterback was holding the ball too long, causing sacks. So our big thing was to get rid of the ball quickly. I think that will help them. We are thin. But we have enough guys, I think. If we don?t get injured, we will be OK.

The Corey Lewis kid is huge in having him back. He?s a sixth-year guy who has some experience. He had a lot of issues with his knee (five surgeries). Hopefully we can keep him healthy. I think (guard Ted) Karras is a good player. The center, (Alex) Hill, could be a good player. He has lost a lot of weight and probably needs to lose more. But he has a chance. The left tackle Simon (Cvijanovic), we have to get him more comfortable, but I think he has a chance.

A: There is a kid (Jon) Davis who is hurt, who I think can be pretty good if he can stay healthy. He has a knee injury. (Evan) Wilson also has a chance but they haven?t been using the tight end in the passing game. He?s a 6-7 kid with a chance. And there?s also Matt LaCosse who is a 6-5 guy who is a former quarterback so I think those three, you have a chance to be decent.

Q: How would be describe the offense?

A: Really multiple with the personnel. Try to get rid of the ball quickly. Don?t hold the ball. More down-hill runs. We could be in a three-tight end, one-wideout set on one down and on the next play be in five-wides. I don?t think we have a Jordan White-type guy (Western Michigan receiver) who you can count on all the time. I haven?t seen it yet. We may have. But I haven?t seen it yet.

A: Yes. (Josh) Ferguson has a lot of ability. He has to stay healthy. He?s a smaller guy, so we have to be really careful with how we use him. (Donovonn) Young has some potential. He is used to the east-west runs and now is more north-south which fits his style better. But that?s a year?s reps that they really didn?t have. So, understanding the powers, the zones, knowing where to cut and the feel up front, that?s gonna take a little bit of time and was an issue in the spring. Those two kids I think are good enough. We have enough where I think we can move the ball.