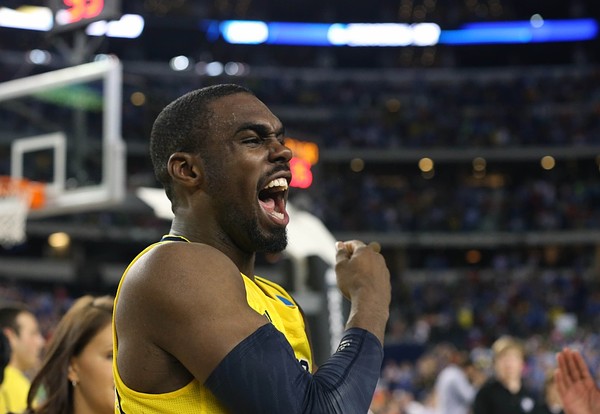 First, it was Trey Burke declaring for the NBA draft. Wednesday, it was Michigan teammate Tim Hardaway Jr. making his future plans known.

Hardaway's decision to go pro is a more curious one, when you consider he?s projected by many to be a second-round selection. At best, he could slip into the late first round. Bottom line: Hardaway is a role player-at best-who always likely will have to fight for a roster spot.

For what it's worth, here's a look at where a couple mock drafts have Hardaway Jr. going:

No doubt, the 6-6 junior, who averaged 14.5 points and 4.7 rebounds, is an excellent shooter who has nice length and works to get open. But he?s a bit of a one-trick pony. And the rail-thin off-guard can be incredibly streaky. To wit: In the last four games of the NCAA tourney when the spotlight burned brightest and the competition stiffened (vs. Kansas, Florida, Syracuse, Louisville), Hardaway hit just 5-of-22 from 3-point range (23 percent). He went 0-for-4 in the title game loss vs. Louisville. If Hardaway is not shooting well, he brings little else to the table. He isn?t an adept ball handler, struggles to create his own shot and is spotty on defense. He also doesn?t get to the free-throw line often enough. The pros are filled with players like Tim Hardaway Jr., many of whom do more than him and shoot more consistently than him.

Regardless, Hardaway-who this last season shot a career-best 43 percent overall and 37 percent from beyond the arc–is coming out, trying to join father Tim Hardaway as an NBA player.

So, what does Hardaway?s loss mean for Michigan next season? Not too much. Yes, Burke and his ultra-quick playmaking skills will be missed. But Hardaway?s shooting acumen can be replaced by players like Glenn Robinson III, Nik Stauskas, Spike Albrecht and Caris LeVert. Touted incoming freshmen Derrick Walton and Zak Irvin also figure to contribute as shooters.

However, Hardaway?s absence will be amplified if Robinson opts to turn pro after his strong freshman season. In addition to Robinson perhaps leaving, fellow freshman Mitch McGary also is weighing his options. If Robinson and McGary bolt along with Burke and Hardaway, the Wolverines may be just a middle-of-the-pack Big Ten team next season.