Will Michigan offense be better without Denard? 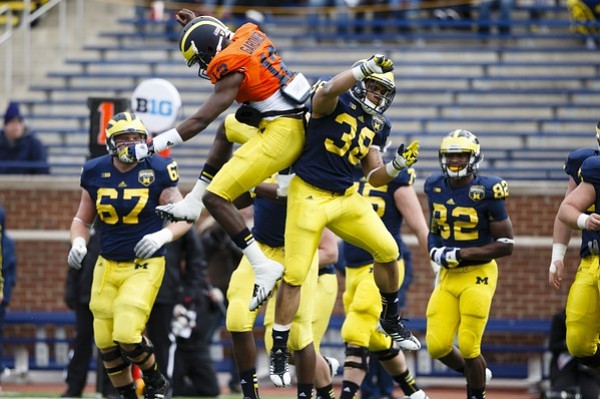 It might be crazy to consider, but will the Michigan offense be better this season sans Denard Robinson? You know, the same Robinson who set numerous records with his ability to rack up eye-popping statistical days? BTN.com's Tom Dienhart and Brent Yarina discuss the topic in this post, and their answers may surprise some.

Question: Will the Michigan offense be better now that Denard Robinson is gone?

Tom: It?s a funny question, isn?t it? To even think the attack could be better with one of the NCAA football?s all-time great players gone seems absurd. But, I think it?s true. We received glimpses of 2013 last season, when Devin Gardner assumed command after Robinson was injured at Nebraska. Now, with D-Rob gone, coordinator Al Borges has dived head first into his West Coast/pro-style playbook-which he couldn?t do with Robinson under center. As a result, Michigan?s offense will look a lot like it did under Lloyd Carr, as Gardner has more conventional quarterbacking skills to give the Wolverine attack improved run-pass balance. And, Gardner still has more than enough athletic ability to improvise, if needed. Now, Michigan needs the personnel around Gardner to step up, as there are questions everywhere.

Brent: Yes, definitely. Devin Gardner features all the qualities that this coaching staff wants under center. As exciting and productive as Denard Robinson was, he didn't fit what Al Borges and company wanted to do as an offense. If nothing else, Gardner will bring more consistency to a unit that's routinely torched inferior foes and struggled vs. top-tier competition the past few seasons. The reason for the dramatic peaks and valleys was Robinson's ability to run all over weaker teams – something he wasn't able to do against equal defenses. No, Gardner isn't the runner Robinson was, but there's a similar gap, if not a bigger one, between Gardner and Robinson as passers. And let's be honest, it's not like Gardner can't run himself; he's an athlete who will hurt defenses on the ground and through the air. While Gardner and Michigan need someone to emerge out of the backfield, in Jeremy Gallon, Drew Dileo and Devin Funchess, they should be OK in the passing game.