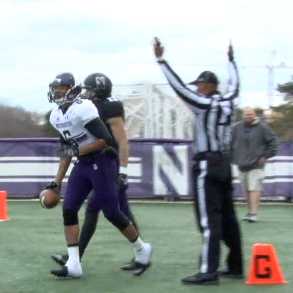 Hope is floating at a high level in Evanston for what may be Pat Fitzgerald?s best Northwestern team yet. In fact, it may be the school?s best team since the 1995 squad that marched to the Rose Bowl. The Wildcats have some swagger as they put the wraps on spring practice, as Fitz prepares for-can you believe this?-his eighth season leading Northwestern. And, it could be special. Very special.

Watch the entire Northwestern spring game on BTN2Go, and read my observations for a team coming off a 10-win season, five postseason trips in succession and first bowl win since the 1948 season.

1. Honestly, Northwestern showed very little during a controlled scrimmage. Redshirt freshmen running back Malin Jones showed on occasion why he is much anticipated. Stephen Buckley is another good-looking redshirt freshman back and was a real spring star and emerging talent for a Northwestern team that has some nice options in the backfield, as it also welcomes back Venric Mark, the  quick, shifty back who showed he?s one of the Big Ten?s best last season. Oh, and blue-collar Mike Trumpy returns.

2. The receivers look strong-again. Athletic Cameron Dickerson isn?t a blazer, but he?s a possession receiver who showed he can slip behind a defense. Fitzgerald has anointed walk-on receiver Mike Jensen as the offensive MVP of the spring. Christian Jones is another wideout who excelled this spring, looking primed to perhaps become a star in a rotation that also includes Rashad Lawrence-the No. 1 wideout–Tony Jones and Mike McHugh. And don?t forget about superback Dan Vitale. He had his moments and looks to build on a breakout 2012.

3. There is a lot to like at linebacker even with David Nwabuisi gone. Chi Chi Ariguzo is a special player, while Drew Smith showed in the spring that he may be primed for a breakout. Collin Ellis also is productive. Damien Proby is an anchor inside but missed spring drills with injury.

4. Keep an eye on the trenches, as little clarity evolved this spring because of injuries. The offensive line entered spring drills with questions. And those questions remain, for the most part. Projected starting left tackle Jack Konopka-who started on the right side in 2012–missed spring drills. Paul Jorgensen and Matt Frazier also will battle for spots but were out this spring. Jorgensen figures in at tackle with Shane Mertz. Frazier is in the mix at guard with Adam DePietro and Geoff Mogus. Up front on defense, Will Hampton was hurt this spring but will battle with Chance Carter at a tackle slot. End Deonte Gibson was hurt this spring but this fall figures in along with Dean Lowry and Tyler Scott. Both units won?t come together until fall camp.

5. The secondary continues the need to be monitored, as it must show it?s capable of defending the deep pass. Yes, NU looks set at safety with Ibraheim Campbell and Traveon Henry. In fact, they could form one of the league?s top safety duos. Really. And Jimmy Hall offers good depth. But cornerback is more uncertain. Nick VanHoose is a lock at one spot but missed spring with injury. The other? Stay tuned. Nothing was solidified in spring drills or on Saturday. Names to watch: Daniel Jones, C.J. Bryant, Dwight White.

6. Quarterbacks Kain Colter and Trevor Siemian held steady. Siemian wasn?t totally sharp as a passer, but he?ll get there. History tells us that. Colter remains hiccup quick. And he throws better than he typically is given credit for. So stop it. Bottom line: This could be one of the Big Ten?s top offenses.