Dienhart: Was matter of when, not if, for Burke 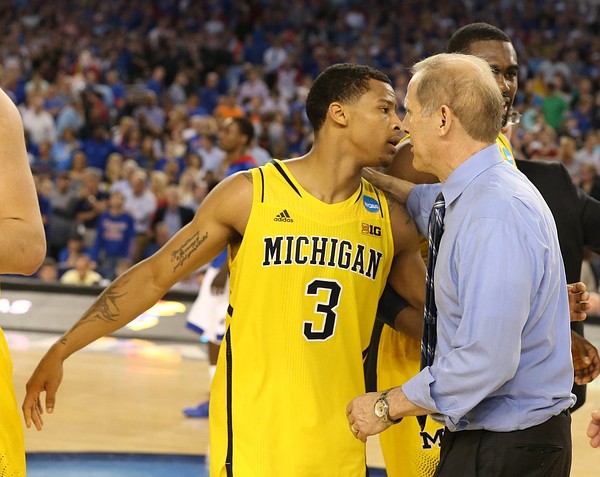 Michigan?s Trey Burke has declared for the NBA draft. No shock there. What is shocking is that it took him so long to make a decision.

In fact, it seemed to be a matter of when-not if-he would turn pro. The 6-0 point guard is projected by most to be a top-10 pick in the June draft.

But Burke opted to return for his sophomore season after helping Michigan win a share of its first Big Ten title since 1985-86. It proved to be a wise choice, as Burke has been named Big Ten Player of the Year, a consensus All-American, the Wooden Award winner and the Naismith Player of the Year–among other accolades. Even better: Burke led Michigan to its first Final Four since 1993, where the Wolverines lost the national championship game to Louisville.

All agree that Burke is ready for the next level. He?s one of the nation?s quickest players, a force off the dribble and a deadly marksman from the perimeter who also has underrated strength. Plus, Burke has developed into a gritty, tough leader who isn't afraid of the big shot or big moment.

Burke?s full arsenal of skills was on display in the NCAA tourney. He was simply spectacular in a Sweet 16 victory over Kansas, scoring all 23 of his points in the second half and overtime-including a last-second 3-pointer that forced overtime-to help the Wolverines mount a furious rally en route to notching an improbable victory vs. No. 1 seed Kansas.

No doubt, Burke. a native of Columbus, Ohio, is a special player and probable NBA star.

Now, Michigan fans wonder if other Wolverines will follow Burke?s lead. The most likely to is Tim Hardaway, Jr. But will freshmen Mitch McGary and Glenn Robinson III bolt? If not, Michigan will have a loaded roster in 2013-14, with Nik Stauskas, Jordan Morgan, Jon Horford, Spike Albrecht and Caris LeVert all coming back. And some touted recruits also are coming aboard, led by Indiana Mr. Basketball Zak Irvin.

Still, not having Burke and his playmaking and shot-making skills will hurt John Beilein?s team.