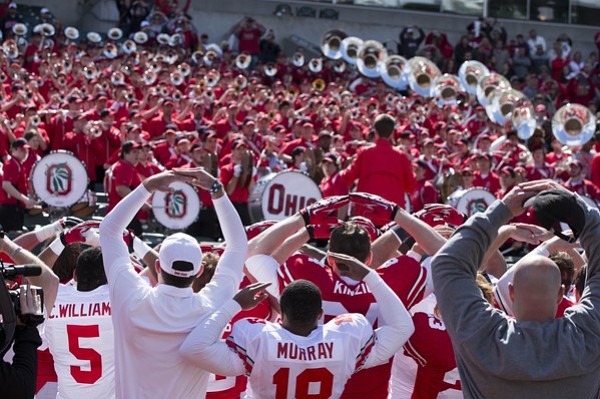 Urban Meyer put the wraps on his second Ohio State spring practice Saturday afternoon. And optimism remains high heading into Year Two coming off a 12-0 season. The offense showed flashes of why it could be one of the Big Ten?s best. And a rebuilt defensive front seven looked good-and only figures to improve. Yes, the Buckeyes may be the Big Ten?s top team-again.

1. Like last spring, Ohio State threw often in an attempt to work on a passing game that was anemic last season, ranking 105th in the nation. Braxton Miller continues to develop coming off a spectacular 2012 season. Yes, he was sacked often today, but Miller still threw for 217 yards, accounted for three touchdowns (two pass; one rush) and looked to be an improved passer. If he can continue to refine the passing work he got today, the Buckeye offense has a chance to be much improved for what may be one of the top offenses in the Big Ten.

2. For the first time in 28 years, Ohio State is replacing every starter along the defensive line. And, the group should be just fine. Leading into this game, end Noah Spence has been a beast. In fact, he may have been the most impressive player in spring practice for Ohio State. The sophomore showed why on occasion in the spring game, notching three sacks. He?s quick off the edge and a stud in general. Also it was hard to not be impressed with sophomore Adolphus Washington, who had four sacks today. The guy is gonna be a monster for a d-line that should be just fine when it?s all said and done.

3. Did Taylor Decker do enough to earn the right tackle job? Not sure. His battle with fellow sophomore Chase Farris may continue into training camp. The right tackle position is one of just two spots on the offense that don?t include a returning starter. The depth along the line seems good, with players like Pat Elflein, Darryl Baldwin, Jacoby Boren and Tommy Brown. But after the game, Urban Meyer said he still was concerned about right tackle.

4. The linebacking corps has been watched closely since spring practice opened. The group underperformed last season. The staff knows what it has in Ryan Shazier (who has been out). But who else is ready to play? Curtis Grant earned the starting spot in the middle last year-then faded from relevance. Well, he?s back in the same spot this spring as a junior. And Grant looked at times like he?s there to stay in 2013. He notched a game-high 16 tackles today along with a sack. But, stay tuned. Joshua Perry also impressed with 10 stops.

5. Ohio State?s secondary doesn?t have myriad questions. But it was interesting to see Eli Apple play. He is a true freshman who graduated early and took part in spring drills. It looks like the early arrival may have paid dividends. Apple had a nice strip and recovery at one point. Gotta think he will be on the two-deeps when it?s all said and done. CB Bradley Roby didn?t play.

Watch our sideline interview with Roby:

6. Not sure what to make of the running backs. Rod Smith and Carlos Hyde didn?t play; Jordan Hall was limited. Ditto the receivers, which is a key area. Who are the playmakers? Corey Brown, Devin Smith, Evan Spencer and Chris Fields all had moments. And for the second spring in a row, Michael Thomas excelled. Urban Meyer thinks Fields earned a starting spot with his spring effort.