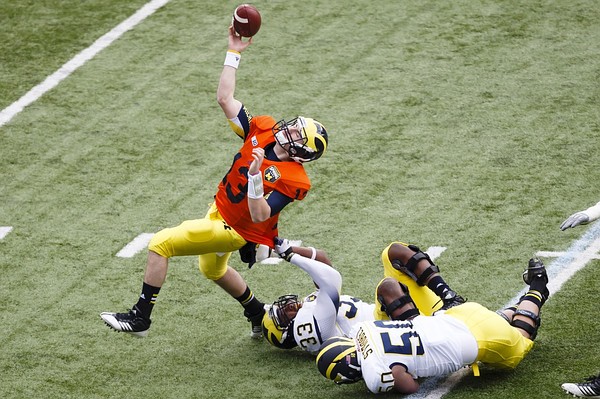 Michigan hopes it took the first few steps toward the school?s first Big Ten championship since 2004 Saturday in the spring game. Brady Hoke?s third team has a lot of potential after coming close to winning the Legends Division in 2012. But it?s also a program in transition on the offensive side of the ball with iconic Denard Robinson no longer around.

1. Many Michigan fans probably are elated to see the return of a pro-style offense, which hadn?t been seen in Ann Arbor since Lloyd Carr left after the 2007 season. Coordinator Al Borges began to make some adjustments last season, when Devin Gardner played five games after Denard Robinson got injured. This is Gardner?s team; this is a revamped offense. And, it showed nice promise today. On his first series of the spring game, Gardner completed a 32-yard strike to Amara Darboh. And Gardner set up Michigan?s first touchdown of the scrimmage with a 35-yard pass to tight end Devin Funchess. Gardner started slowly but hit 11-of-16 passes for 145 yards and a score on the day. By the way: Backup quarterback is a big issue.

2. Everyone wanted to see the offensive line. How would it look as the unit works in three new starters along the interior? Well, it showed flashes of what it could do for an offense that needs to run the ball better from the tailback spot. Right guard Kyle Kalis is impressive, however, Denard Robinson is gone, so someone needs to run the ball well. Still, there were several instances when running plays were blown-up quickly. Bottom line: work remains for the unit, which was uneven on this day.

3. How bad was the production from the tailback spot in 2012? It was the worst in the modern history of the program. We really won?t get a good idea of how good this collection of tailbacks will be. Fitz Toussaint didn?t play as he recovers from injury. And incoming freshman Derrick Green won?t arrive until the summer, bringing with him the billing as the nation?s top prep running back. Thomas Rawls, Drake Johnson and others took their turn on Saturday. Rawls looks good, as did always fleet Dennis Norflett.

4. The receiving corps is interesting on a day when the offense didn?t show a lot of firepower. Staffers know what they have in Jeremy Gallon and Drew Dileo. After that? We saw several receivers take turns on Saturday in the spring game. All showed some potential. Jehu Chesson at times flashed his trademark speed. Amara Darboh is a move-the-chains guy. Chesson and Darboh are big targets, a commodity that is needed on this receiving unit. In fact, Darboh may have done enough to claim the No. 3 wideout role. Devin Funchess continues to impress. He could really thrive in this new style.

5. Frank Clark looks like the real deal for a d-line that looked good today. The defensive end has been heaped with praise throughout spring drills. In fact, offensive tackle Taylor Lewan has called Clark the team?s best player this spring. No faint praise. The Wolverines need some players to bring the heat off the edge; Clark could be the guy. He showed it a few times today. And how about Taco Charlton? He graduated high school early and looked good today coming off the edge at end, notching a couple of ?sacks.? Fellow end Mario Ojemudia also impressed.

6. After the game, Brady Hoke said LB Jake Ryan could be playing by mid-October after injuring a knee earlier this spring. Amazing. That was great news. Among the linebackers who played, James Ross and Cam Gordon looked good.