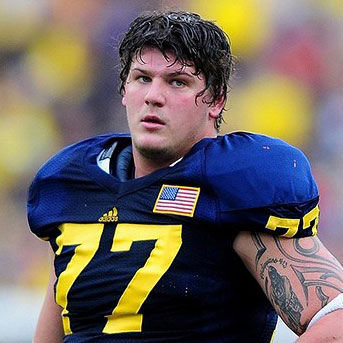 Michigan came close to breaking through to the Big Ten title game last season in Year Two under Brady Hoke. But, alas, it didn?t happen-as a loss at Nebraska in which Denard Robinson got hurt proved to be detrimental. So, the program still is searching for its first Big Ten championship since 2004. It could come this season, if among other things, Devin Gardner proves to be the real deal and the defensive line develops. Yes, this is still a relatively young team, but it has lots of talent, potential and hunger as it begins life without Robinson, a Michigan icon.

Life without Denard Robinson begins, as the program moves forward without one of its all-time greats. And, honestly, things are probably gonna be just fine, as coordinator Al Borges can use more of his West Coast-style playbook with Devin Gardner at quarterback as the attack assumes a more conventional look. Gardner turned some head last season-but he struggled when the competition got better.

The Wolverines received surprising news when OT Taylor Lewan announced he would return for his senior season. He?ll be one of the nation?s best. Right tackle Michael Schofield also is back, giving Michigan two bookends up front. But the interior must be replaced, as guards Joey Burzynski and Patrick Omameh and center Ricky Barnum are gone.

Keep an eye on young studs like Kyle Kalis and Jack Miller. The line isn?t the lone concern, as more is needed from the running backs. Fitz Toussaint isn?t taking full scale part in spring drills while recovering from a leg injury. Incoming freshman Derrick Green may be the answer when he enrolls over the summer; he?s considered to be the nation?s top back. Thomas Rawls and Justice Hayes are still around but are pedestrian options. A go-to receiver also is needed. Is Jeremy Gallon really the guy? Jeremy Jackson and Drew Dileo are back, too.

Who will be the stars and playmakers for this defense? The focus is up front for a unit that must replace T Will Campbell and E Craig Roh. Players like Ondre Pipkins, Frank Clark, Jibreel Black and Quinton Washington must step up along the line. And injury to LB Jake Ryan means he may be out for most-if not all-of the coming season. Brennen Beyer has been moved from DE to LB as a result.

At least there?s nice depth at linebacker. CB Blake Countess must show he is over a knee injury that cost him almost all of last season. And he needs a partner. Thomas Gordon is the answer at one safety spot. Who is the other?