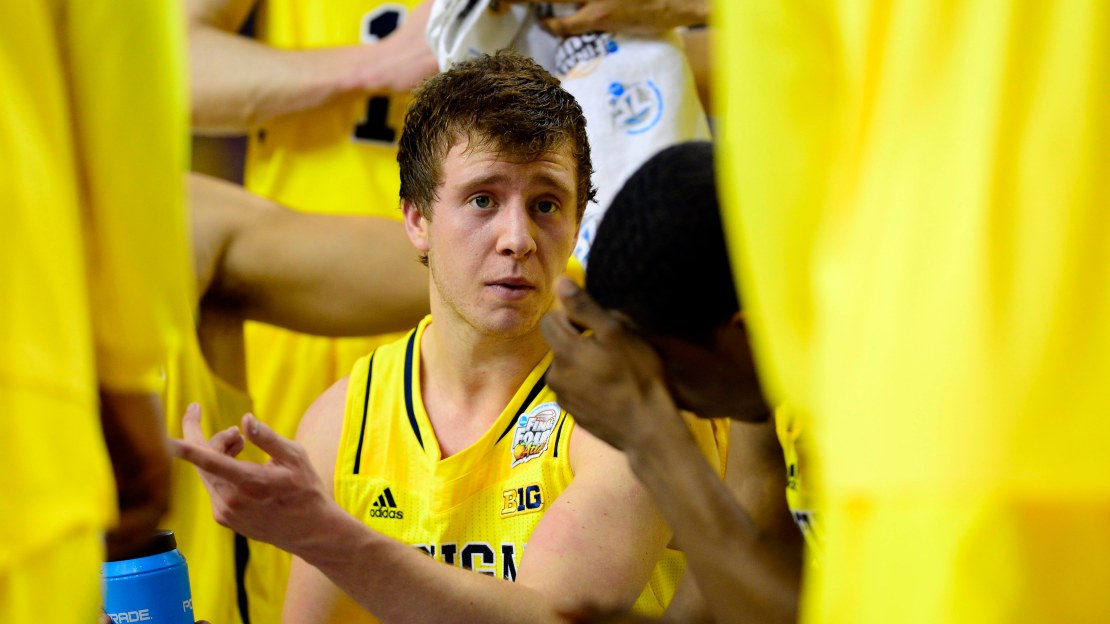 America, Spike Albrecht. Spike Albrecht, America. The Michigan freshman introduced himself to the nation with an out-of-this-world first half, in which the guard hit 6-of-7 shots and scored a career-high 17 points. His previous best entering the night: Seven. Check out the entertaining Twitter reaction to Albrecht's unexpected first-half performance.

See all the tweets below and hear Trey Burke talk about Albrecht at the end of the video above.

Damnnnnnnnnnnnnnn. I'm on the way to the M den for a #2 jersey.

BREAKING: Spike Albrecht declares for the NBA draft at halftime

Seriously – I have never seen anything like this. Never. Reasonably confident I never will again. #Spike

Does Spike Albrecht ride a unicycle? I bet he does. #Michigan #FinalFour

Spike just replaced Tiger as the favorite at Augusta

Yes I am right behind UL bench. No Pitino did not try to send me in to guard Albrecht. But I'm ready if he needs me.

BREAKING Ryan Gosling has accepted the role of Spike Albrecht in the movie version.

Spike Albrecht: If Michigan wins, he?s a legend. If he loses, probably a trivia question.

Um, I mean …. do you just stick with Spike in the second half over the Wooden Award winner? Crazy thought, crazy game. Spike did this.

This is like the end of a lousy Japanese monster movie, where the monster suddenly unleashes a superpower he apparently forgot he had.

This whole Michigan run has felt like a dream. And it's ending with the most unbelievable part.

So when will the bball from Spike Albrecht's 3's start lighting on fire and Jim Nantz yell 'He'sHeatingUp!' or 'IsItTheShoes?' #NBAJam

Also everyone needs to change their story datelines to ?ALBRECHTLAND — ?

If Spike Albrecht doesn't slow down, he'll wind up marrying a Kardashian tonight.

Also, I really hope Spike Albrecht turned off the "alert me of new Twitter followers" option. He has picked up at least 3K in the first half

Long way to go, but Spike Albrecht is becoming one of the all-time great NCAA Tournament stories. I mean, ALL-TIME. #dechr

Seriously Spike Albrecht is why there is no better reality show than sports. #Michigan

So Beilein saved McGary for the NCAA tournament and Spike for the Final Four? Got it. Genius.

Can't remember anyone as hot in champ game as albrecht. What a half.

"He stands alone." - Clark Kellogg, on Spike Albrecht. What the hell is in my drink?

Spike Albrecht has 17 points tonight, which is exactly as many points as he had in a 17-GAME SPAN earlier this season.