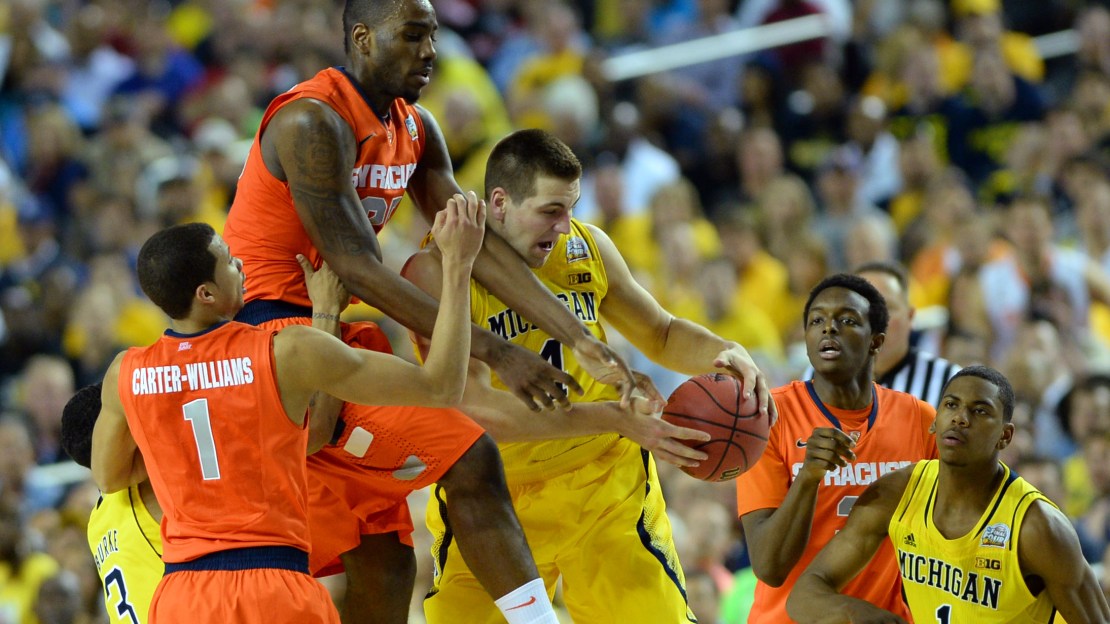 On Friday, Mike predicted that whichever of Syracuse or Michigan scored over a point per trip would win, and he further opined that Michigan was up to the task and would prevail with a five-point win.

Turns out, Mike was wildly off. While a point per trip was indeed enough to win (Syracuse managed just 0.93 points per possession), and while the Wolverines did, in fact, win by five points, the final score was 61-56-far afield from Mike?s 65-60 prediction. So, hold off on going to Vegas, Mike.

Michigan?s win was one of its most unusual this season. Coming into last night?s game, John Beilein?s team was 1-5 when scoring under 1.09 points per possession. To put that number in context, only two teams in the Big Ten averaged at least 1.09 points per possession in conference play (Michigan and Indiana). So unless the Wolverines scored at a breakneck pace, they were almost sure to lose.

For most of the season then, the calculus has been rather straightforward-when the Michigan offense is humming, the team wins. When that offense is anything short of ?excellent,? the team almost always loses.

But last night Michigan actually won on the back of its defense. Sure, Syracuse was especially cold from the outside last night (making 2 of 14 three-point attempts), but credit Michigan for taking away the Orange?s offensive rebounding game. Syracuse is the nation?s 9th-best offensive rebounding team in the country, and they were largely kept off the glass despite a decidedly-interior attack.

Michigan now faces Louisville in the National Championship game, and much will be made over the turnover battle. The Cardinals rank as the second-most proficient turnover-forcing team in the country, while Michigan?s offense happens to lead the country in lowest turnover rate. And sure, if Louisville forces 20 turnovers, it will win. If Michigan commits 5 or fewer, the Wolverines will win.

But the turnover story will likely turn out to be much ado about nothing. Over the past three games, Louisville opponents have coughed the ball up on under 18 percent of their possessions. And yet, Louisville continues to win.  Indeed, while defense drove this Louisville team for most of the season, the offense has been what?s carried it lately. After all, Wichita State had no trouble with the Cardinals? pressure, scoring 1.1 points per trip. Meanwhile Louisville?s offense is scoring 1.2 points per possession in the Tournament.

In other words, I see a track meet coming. And fortunately for Michigan, it?s well-acquainted with those kinds of games (indeed, the Wolverines have won this type of game 94 percent of the time this season). I think it?s time to party like it?s 1989, because I like Michigan in this one.