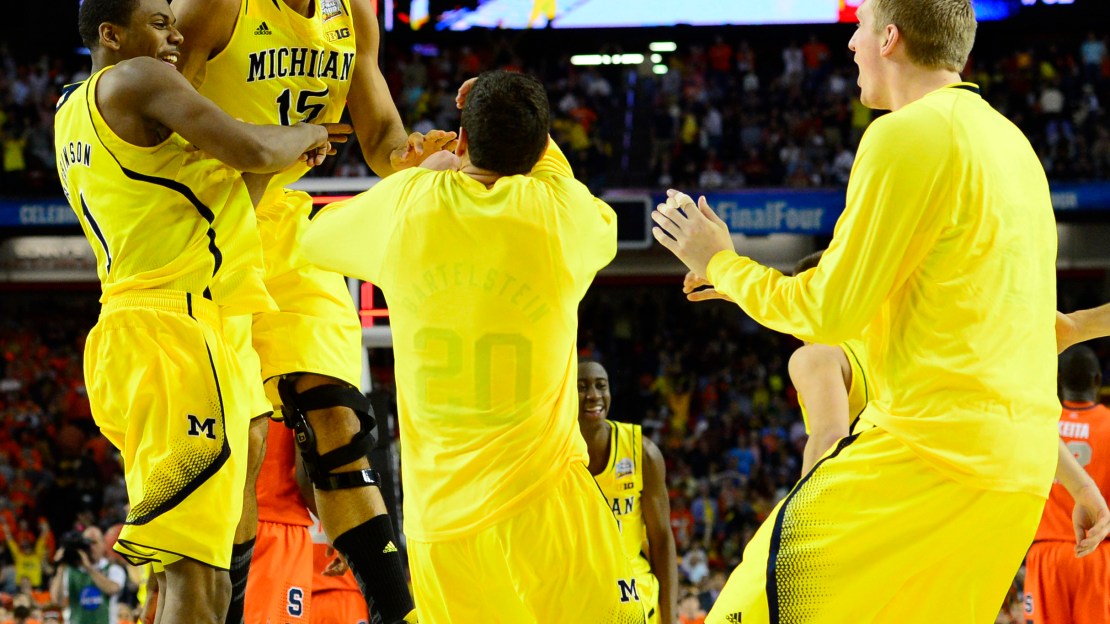 Mitch McGary totaled 10 points, 12 rebounds and a career-high six assists to lift Michigan past Syracuse, 61-56, in Saturday's national semifinal at the Georgia Dome in Atlanta.

Attacking Syracuse's suffocating zone defense in the first half with 3-pointers, crisp passing and a fearless attitude, the Wolverines advanced to play Louisville in the national championship game Monday night.

Michigan (31-7) will be going for its first national title since 1989. Syracuse (30-10) failed to complete an all-Big East final in the fabled league's last season before breaking up.

FINAL: Mitch McGary scored 10 points, pulled down 12 rebounds and dished out six assists to lead Michigan to a 61-56 win over Syracuse in the national semifinals Saturday in Atlanta. The Wolverines, who had to hold on late after owning an 11-point lead, will face Louisville in the national title game Monday night. Glenn Robinson III was 5-of-7 from the floor and chipped in 10 points for the Wolverines, who had 16 assists on 21 baskets. The Wolverines grabbed 18 offensive rebounds. Michigan also got a double-digit contribution from Tim Hardaway Jr. (13 points). C.J. Fair scored 22 points and corralled seven rebounds for Syracuse (30-10) in a losing effort. More Syracuse scoring came from Brandon Triche (11 points). The Wolverines outrebounded the Orange 42-36. The victory extends Michigan's winning streak to five games.

HALFTIME: Mitch McGary put up six points, six rebounds, four assists and two blocks to help Michigan jump out to a 36-25 halftime lead over Syracuse in the national semifinals in Atlanta. Michigan, which closed the half on a 11-4 run, is dominating the rebounding battle (22-15). Trey Burke, the leading scorer this season for the Wolverines, was limited to just three points at the break.However, Michigan received 16 points from its bench, including six apiece from Spike Albrecht and Caris LeVert. The Wolverines played team basketball in the first half, to the tune of 11 assists on 13 field goals. C.J. Fair helped the Orange with nine points.