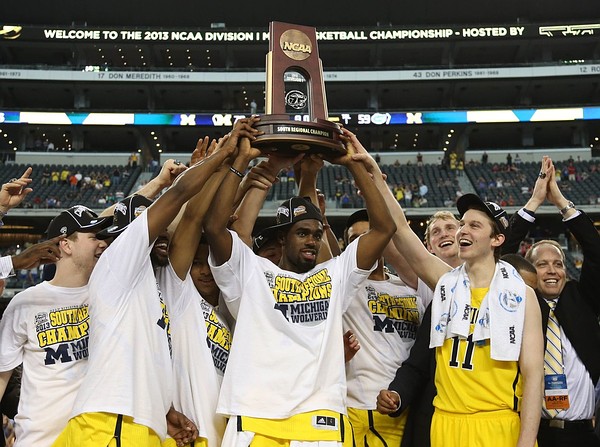 It?s time to reach into my mail bag. There is a lot going in, with the Final Four this weekend and spring football in high gear. In fact, April is when all of the Big Ten spring games will take place. Nebraska goes on Saturday. Keep the cards and letters coming. Good stuff! Thanks.

Do you like Michigan?s chances in the Final Four? -Matt P.

I think the Wolverines will ease by Syracuse. Michigan has the shooters to take the teeth out of the Orange 2-3 zone defense with guys like Nik Stauskas, Glenn Robinson III, Tim Hardaway, Jr., and Trey Burke. And Michigan also has the ability to penetrate into the zone. Don?t forget about Mitch McGary, who may be the hottest player in the NCAA tournament.

Having said all of that, I?m not sure Michigan has what it takes to beat Louisville-if the Cardinals get by Wichita State and into the title game. U of L plays great defense and can score in a variety of ways. Plus, the Cards have the emotional story of Kevin Ware helping to carry them in Atlanta. And don?t forget about the coaching of Rick Pitino.

What do you think of the Richard Pitino hiring at Minnesota? – Ginny D.

No doubt, the Pitino name brings a lot of excitement and buzz, two commodities the Minnesota program needs to get over the malise of the Tubby Smith era. Can the guy coach? No one knows for sure. We do know he has good bloodlines and has been an assistant for some notable coaches, including Florida?s Billy Donovan. Bottom line: What does Minnesota have to lose taking a chance on a 30-year-old head coach who has one year of head coaching experience? Nothing, really.

Victor Oladipo and Cody Zeller: What do you think they should do-go pro or stay?

I think they both should go pro. Look at some mock drafts.

Each is projected to go among the top 10 picks in both of those mock drafts. How can you not go pro if that?s the case? I think Oladipo is more NBA-ready now that he has augmented his shooting. But, Zeller isn?t far behind. In fact, I think the development of his game would be hastened by practicing vs. grown men in the NBA and working on his skills 24-7. How much more can he really benefit from playing in college? No one in Indiana practices will be able to press him. And Zeller won?t play vs. many top-end big men in games. So, I think both should go pro.

Who will be the starting quarterback for Iowa? Will the Hawkeyes get their dismal throwing game going? What record will Iowa have this year? Will Iowa get to a bowl game? – Kevin

Whoa! One question at a time. It?s a three-man race to replace James Vandenberg, who was the brunt of a lot of unfair criticism last season. Coordinator Greg Davis is auditioning sophomore Jake Rudock, Cody Sokol-who arrived last season as a JC transfer–and redshirt freshman C.J Beathard. Who will win the job? We likely won?t know until near the end of fall camp. But whoever is taking snaps would benefit from better play by the receivers. Kevonte Martin-Manley looks like the main weapon. But others will need to step up.

The schedule has its challenges:

If I were to make a guess, Iowa likely will go 7-5 or 6-6 vs. this schedule, which would be good enough to earn a bowl coming off last year?s disappointing 4-8 record.

I still haven't seen the All-Big Ten teams for men's basketball. Have they been announced? – Chuck Huffman

Yes, Chuck, they have been announced. Here's a link.

If your school is on a winning streak — like Ohio State football in 2012 and late in the OSU basketball season — do you do the same thing every game day (same outfit, same routine, etc.)? Gets kinda tedious, right? – Jon

No, I never have been superstitious  But, I know a lot of people are, wearing the same shirt, socks, hat, etc., thinking that will help whatever streak they are rooting for to continue. More power to ya!