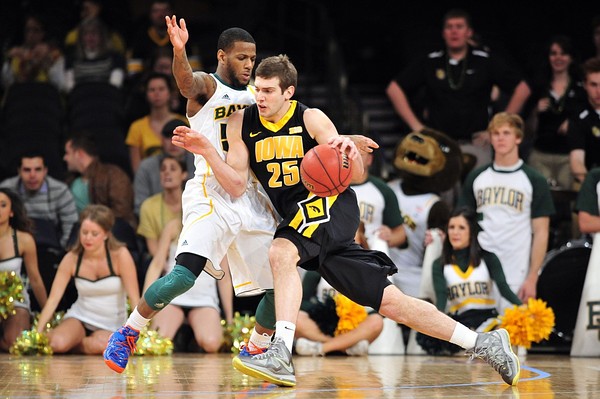 Pierre Jackson had his fourth straight double-double with 17 points and 10 assists to lead Baylor to the first National Invitation Tournament title in school history with a 74-54 win over Iowa on Thursday night.

Look back the run through the NIT so far for the Hawkeyes:

During the game catch up on all the action on our Big Ten scoreboard, and get recaps and photos in this post, too. You can also follow the game live via the HawkeyeSports.com GameTracker.

FINAL: Cory Jefferson scored 23 points and grabbed eight rebounds to lift Baylor to a 74-54 win over Iowa on Thursday at Madison Square Garden in New York in the NIT. Jefferson and Isaiah Austin both had good games for Baylor (23-14). Jefferson knocked down 8-of-11 shot attempts.

Aaron White scored 12 points and grabbed six rebounds for Iowa (25-13) in the loss. Mike Gesell had a quality shooting game, nailing 4-of-6 shots from the field and scoring 10 points. The Hawkeyes struggled from the floor, shooting 26 percent (18-of-68). Iowa was tough on the offensive boards, grabbing 23.

Austin scored 15 points, yanked down nine rebounds, contributed four assists, and made 6-of-7 shots from the floor. The Bears shot 54 percent from the field (26-of-48). Baylor shot 18-of-23 from the free throw line. Pierre Jackson stuffed the stat sheet for the Bears with a double-double. He contributed 17 points, hauled in four rebounds, and handed out 10 assists.

Baylor pushes its winning streak to five games with the victory.

HALFTIME: Baylor leads 27-22 over Iowa at the half thanks to a nice start from Isaiah Austin, who has seven points on 3-3 shooting. Trailing early in the game, the Bears used a 9-0 run to blow past the Hawkeyes and take a 9-2 lead. Iowa put the clamps on Baylor's three-point game (1-of-8, 13 percent from long range), while the Bears shot 56 percent in the first half on two-point field goals. Baylor demonstrated its offensive efficiency by racking up seven assists on 11 baskets. Seven Iowa players have scored. Aaron White is leading the Hawkeyes. The sophomore has six points.