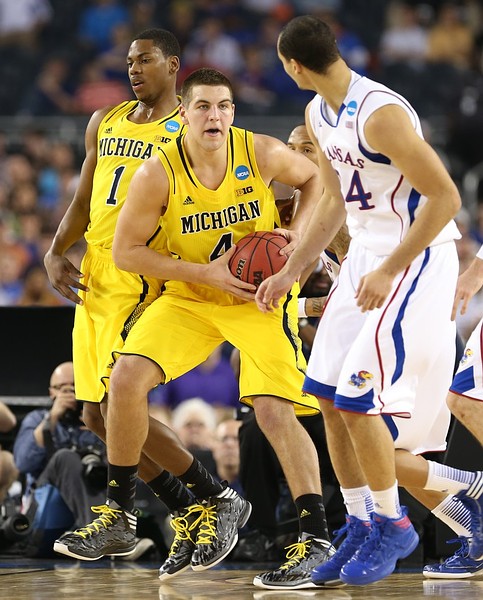 No doubt, the emergence of freshman big man Mitch McGary in the NCAA tourney has turned Michigan into a dangerous team that?s capable of winning the national championship. Let?s start daily links with the big fella.

McGary has scored 12, 21, 25 and 11 points in his first four NCAA games. And he also has grabbed an aggregate 46 rebounds. The guy has been a beast. Oh, and he also leads the tourney in unicycle references. If you have to ask, you haven?t been paying attention. Shame on you.

To win their first national crown since 1989, McGary and Michigan first will have to walk through Syracuse and its-all together, now-?vaunted 2-3 zone defense.? And Orange coach Jim Boeheim thinks the Wolverines are better offensively than anybody his team has faced this season. He?s probably correct.

NIT OR NCAA? What?s better for this Iowa team: A deep NIT run or an NCAA bid that could have resulted in an early exit?

I think I know the answer to that. This is all about building toward a huge 2013-14 for the Hawkeyes. Does this run to New York mean the Hawkeyes? season is a success? It seems the players are undecided. Me? I say ?yes.?

TICK, TOCK… As the coaches fly off the board and others seem content in their current situations, Minnesota continues its search for a coach to replace Tubby Smith. And, ironically, Smith will become the coach at Texas Tech, according to reports. Amelia Rayno of the Minneapolis Star-Tribune looks at how long some recent Big Ten coaching searches took.

Is it time to panic, Goldy? Nope. There are no blue ribbons for finishing first. It?s more vital to get the right hire. I trust Norwood Teague. And, you should, too.

I know one thing I feel: This team at times struggled too much to score. What?s gonna happen if junior Deshaun Thomas leaves early? I know LaQuinton Ross will pick up his production, but others must, too.

COLLINS TO BE INTRODUCED: With Duke eliminated from the NCAA tourney on Sunday, Northwestern will introduce Blue Devils assistant Chris Collins as its head coach today.

Collins is proof you can go home again, says Neil Hayes of the Chicago Sun-Times. Since leaving Glenbrook North in suburban Chicago, Collins has spent the 17 of the last 21 years at the side of Duke coach Mike Krzyzewski. But, is he REALLY ready for the challenges of NU after living the high life with Duke? Who knows? But, I do know that Northwestern has nothing to lose for trying. It?s time to think outside the box in Evanston. Congrats, A.D. Jim Phillips!

Speaking of Indiana, Terry Hutchens of the Indianapolis Star has some random thoughts on the Hoosiers? early NCAA exit.

Among the myriad items he touches on is Cody Zeller and if he should turn pro or not after his sophomore season. Hutchens thinks Zeller should return. Me? He should go. I think his best chance for significant improvement is at the next level. Why not get paid while doing it?

STRONG BIG TEN SHOWING: Yes, the Big Ten has just one team in the Final Four. But Graham Couch of the Lansing State Journal thinks the conference still validated itself as the nation?s best in the Big Dance.

TIME TO STUDY DUAL-THREAT QBS: Yes, Nebraska is worried about self-improvement in the spring. But the Huskers also have an eye on their foes, some of which may feature dual-threat quarterbacks. You know, the kind of signal-callers that have confounded Nebraska under Bo Pelini?

LOOK OUT FOR CALHOUN: With DE William Gholston off to the NFL early, Shilique Calhoun has a chance to emerge.

The guy could form a nice pass-rushing tandem with Marcus Rush for a Spartans team that may have to be led by its defense–once again–as the offense comes together.

Beilein says Trey Burke is "arguably the best point guard in the country." ….

USC hires Andy Enfield. Amazing how a career can change in two games. Yet, I like this hire much more than UCLA's.

My take: Agree. Enfield was hired based on his results and potential. Alford was hired on his name. What hire makes the most sense? C?mon, you know.

My take: I think former UCLA coach Ben Howland would be a nice hirer. Virginia?s Tony Bennett is another.

Really happy for Gene Keady getting into College Hoops HOF..won a ton of games/Big 10 Titles and is actually fun to be around..huh!!

My take: Interesting. All things being equal, I would go with redshirt freshman Appleby. I love the kid?s size and potential. Henry has had his chance. Purdue should about building for the future. The Boilermakers have gone too long with inadequate play under center.