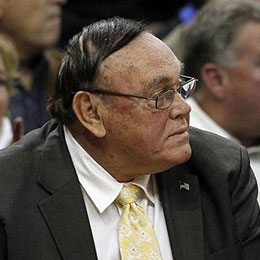 In 25 years of coaching Purdue, Gene Keady never made it to a Final Four. But, he has made it to the College Basketball Hall of Fame it was announced on Monday night. And, it?s a well-deserved honor despite that one void in an otherwise stellar resume.

Keady?s best team was in 1987-88. A squad led by seniors Troy Lewis, Everette Stephens and Todd Mitchell went 29-4 and won the Big Ten with a 16-2 mark but lost to Mitch Richmond and Kansas State in the Sweet 16.

Keady began his career at Western Kentucky, where he coached for two years after serving as an assistant at Arkansas for Eddie Sutton.

Keady has been an assistant since 2010 at St. John?s for Steve Lavin, who was a one-time Keady assistant. Other former Keady assistants who currently are head coaches also includes Tennessee?s Cuonzo Martin, Vanderbilt?s Kevin Stallings, Kansas State?s Bruce Weber and Purdue?s Matt Painter.

Upon retirement after the 2004-05 season, Keady served as an analyst for BTN and also was an assistant with the Toronto Raptors in 2005-06.

Keady will be enshrined with Rollie Massimino of Villanova fame, Maryland?s Tom McMillen, George Ravling of Iowa and other stops, Bob Hopkins of Grambling, George Killian of FIBA and the 1963 team from Loyola University of Chicago, which broke through racial boundaries and defeated Cincinnati in the national championship game.

Induction ceremonies will be Nov. 23 in Kansas City, Mo.