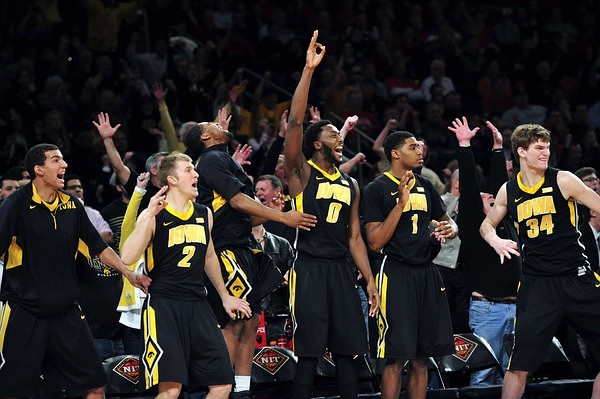 Devyn Marble had 21 points and nine rebounds to help Iowa reach the NIT championship for the first time with a 71-60 win over Maryland on Tuesday night.

Iowa (25-12), which has recovered from a rocky start to its Big Ten season, won for the 11th time in 14 games. Eric May finished with 12 points, his last on a big 3-pointer with 1:01 to play that iced it for the Hawkeyes, who laid the foundation for a future Big Ten rivalry with Maryland, which is set to join the conference starting in 2014.

FINAL: Devyn Marble scored 21 points, grabbed nine rebounds and handed out three assists to lead Iowa to a 71-60 win over Maryland on Tuesday at Madison Square Garden in New York in the NIT. Iowa (25-12) broke out for a 22-6 run to take a 12-point lead in the first. Mike Gesell knocked down a field goal that capped off the run by the Hawkeyes and helped Iowa lead 38-33 at the half. Zach McCabe had a quality shooting game, nailing 3-of-5 shots from the field and scoring seven points. The Hawkeyes tallied 16 assists on 24 baskets. Iowa also got double-digit performances from Aaron White (10 points) and Eric May (12 points). Alex Len scored 16 points, grabbed nine rebounds, and knocked down 6-of-9 shot attempts for Maryland (25-13) in the loss.

HALFTIME: Devyn Marble scored 12 points and grabbed five rebounds and Adam Woodbury added nine and two to lead Iowa to a 38-33 halftime lead over Maryland in the NIT semifinals at Madison Square Garden. The Hawkeyes did much of their damage from the free-throw line, making 12-of-14 attempts (86 percent), compared to Maryland's 1-of-1 effort from the stripe. Iowa forced 11 turnovers and outrebounded the ACC's top rebounding team (18-17). Charles Mitchell helped the Terrapins with six points, three rebounds, and three assists.