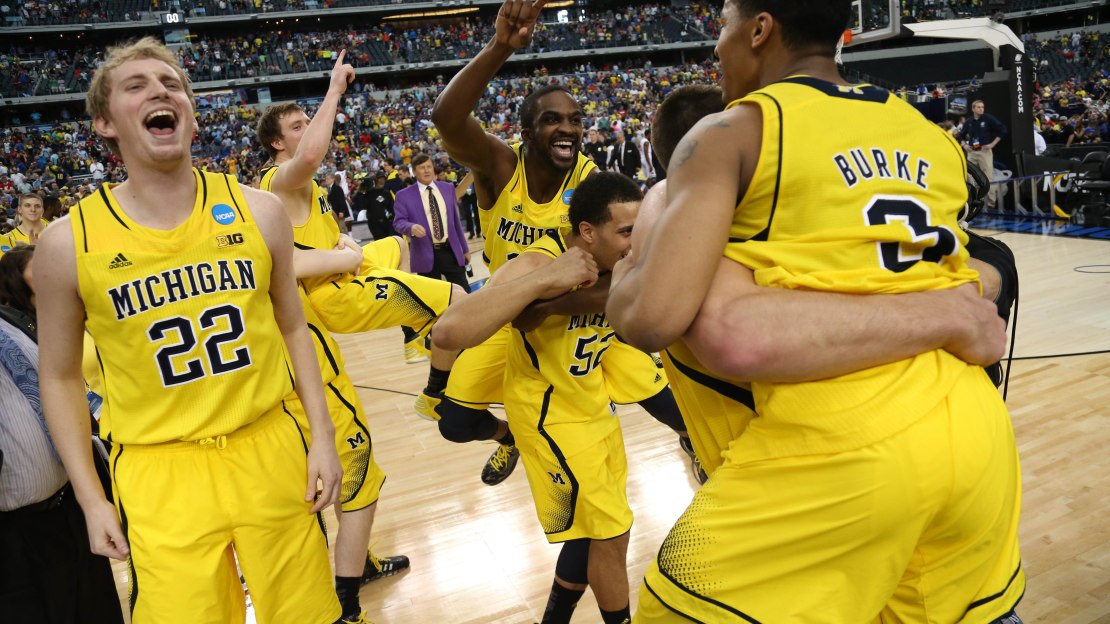 Freshman guard Nik Stauskas scored 22 points including six 3-pointers and Michigan is going to the Final Four for the first time since the Fab Five era after a 79-59 rout of Florida in the South Regional final Sunday.

The Wolverines (30-7) scored the game's first 13 points and maintained a double-digit lead the rest of the game against the SEC regular-season champion Gators (29-8), who lost in a regional final for the third straight year.

Stauskas hit all six of his 3-point attempts, including consecutive makes from the left corner for to give Michigan a 41-17 lead.

Check out this monster block from the first half:

How high can Glenn Robinson III jump? This high:

VIDEO – Glenn Robinson III got UP on this alley-oop. #MarchMadness http://t.co/illgpabtF2

FINAL: Nik Stauskas scored 22 points and Trey Burke added 15 points and eight boards to lead Michigan to a 79-59 victory over Florida on Sunday at Cowboys Stadium in Arlington in the Elite Eight. Stauskas picked up Michigan (30-7) with three assists, 7-of-8 shooting from the field, and 6-of-6 shooting from beyond the arc. Michigan shot 10-of-19 from three-point range during the game, good for 53 percent. The Wolverines shared the ball to the tune of 18 assists on 30 baskets. Michigan also got a double-digit performance from Mitch McGary (11 points). The Wolverines never trailed in the game. Michigan's largest lead was 25, which came with 1:10 remaining. Leading 30-15 in the first, the Wolverines used an 11-2 spurt to open their cushion to 24 points with 4:06 to go in the first half. Stauskas capped the run off with a field goal that helped the Wolverines lead at the half.

HALFTIME: Nik Stauskas scored 19 points to lead Michigan to a 47-30 halftime lead over Florida in the South Region final. Stauskas shot 6-of-6 from the field, including 5-of-5 deep. Trey Burke added 11 points, three rebounds and five assists for the Wolverines, who led by as many as 24 points and never trailed. The game was knotted up when the Gators went 2:31 without scoring, allowing the Wolverines to take a 13-0 lead with 16:56 left in the first half. Michigan, which scored the first 13 points, made it rain from long range, shooting 58 percent (7-of-12). Will Yeguete led the Gators in the first half, with nine points and four rebounds.