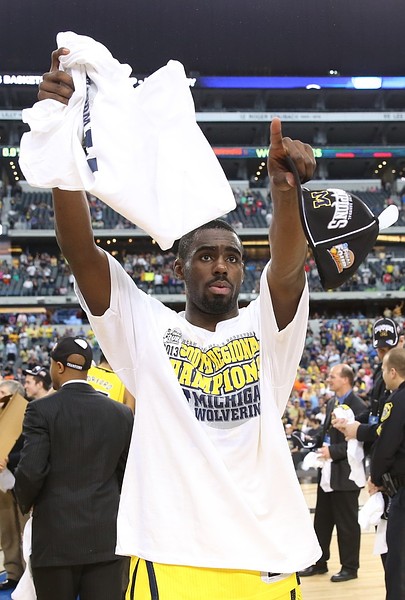 With two-and-a-half minutes left against Kansas, Michigan was losing by 10, and its season looked done. From that point on, Michigan went on a 104-72 run over the rest of the weekend.

Trey Burke?s heroics were followed up by the complete demolition of Florida, which had the unfortunate luck of drawing ?December Michigan.? If you recall, this was the Wolverines team that wasn?t all that fond of missing shots. Back then, Nik Stauskas was hitting something like 60 percent of his three-point attempts. Against Florida, he made all six.

But the real story over this Tournament has been the play of Mitch McGary.

I?m not usually one to fall for the small sample sizes that are found in the NCAA Tournament and claim that one four-game stretch has transformed someone from not on the board into an NBA lottery pick, but Mitch McGary?s play might have transformed him from someone not on the board into an NBA lottery pick. Moreover, while I know that Trey Burke is the engine that makes this train go, and that without Burke?s heroics I?m waxing poetic about Michigan?s porous defense letting down an unstoppable offense, the fact of the matter is that McGary deserved the South Regional?s Most Outstanding Player, not Burke. Keep in mind that not only has the matrix revealed itself to McGary on the offensive end, but he?s also leading the charge on defense, collecting 32 defensive rebounds in UM?s four Tournament games. To put it simply, no one not named ?Russ Smith? is playing better collegiate basketball than Mitch McGary.

Michigan State?s season ended in a rather anti-climactic fashion, falling to Duke 71-61 in the Sweet 16. Neither team could make a shot in the paint, so this turned into a jump shooting contest. Generally speaking, that hasn?t been MSU?s forte over the years. Indeed, Duke?s edge from the perimeter (39 percent to 25 percent) and at the free throw line (92 percent to 75 percent) proved to be the difference. Keith Appling?s season-long seesaw act ended on a high note, as the junior guard scored 16 points on 9 shots.

The good news is that-and this is contingent on early-entry decisions-Michigan State should be very good next season. Should Gary Harris and Adreian Payne decide to give it one more go-round, then it?s hard for me to find a team better suited for the preseason #1 ranking (Kentucky?s bringing in a nice freshman class, apparently. So that might be the other contender). But this year?s team was also plenty talented, it just seemed to get in its way much of the time. Frequently heard on press row during the Big Ten Tournament was that if points were awarded based on the degree of difficulty of the shot, the Spartans would have dominated the competition. On the offensive side, patience, passing, and spacing are areas this team needs to focus on. To that end, I?m very intrigued by the off-season development of Denzel Valentine. Although he was frequently the cause of Michigan State?s turnovers, his statsheet marks him as a renaissance man on the basketball court. The Spartans had another one of those-went by ?Draymond?-and he turned out to be a decent basketball player. Those are lofty expectations to place on Valentine, who will never rebound at such a high level, for one. But he does have the potential to affect the game in a multitude of ways, and if he takes a big step in the offseason, Michigan State should be awfully good next year.

Ohio State showed up late to its Elite 8 matchup against Wichita State, and paid the price. With 11 minutes to go, this was a 20-point game and Ohio State fans were furiously cancelling those hotel reservations in Atlanta. But fueled by some late scoring from LaQuinton Ross, the Buckeyes got this to a three-point game with 3 minutes to go. Sadly, OSU?s defense failed in the next two possessions-allowing a three-pointer on the first and giving up an offensive rebound that led to free throws on the second. That said, the overall defense OSU played over the final 11 minutes was outstanding. The Shockers managed to score just 14 points in that span, and three of those points were due to OSU?s intentional fouling in the game?s final minute.

Offense was the culprit behind the loss, which is a bit surprising because Thad Matta was able to pair a scorer to go along with Deshaun Thomas? 21 points. Ross? late flurry gave him 19 points on 12 shots for the game, and that was in a mere 22 minutes. Of course, that means the rest of the Buckeyes managed to score 26 points on 30 shots. That?s not terrible by any means, but it wasn?t good enough to defeat a solid Wichita State team.

Mike mentioned that Indiana?s window may have closed on the possibility of hanging a 6th banner, and I think something similar might have just happened with Ohio State. Thad Matta has put together an unbelievable four-year stretch, going 123-27 in that span, and winning at least two Tournament games in each of those seasons. But it sounds like Thomas is likely headed for the NBA draft, which raises the question of where next year?s offense is going to come from. While other starters might have the potential to take on more responsibility in the offense, there was plenty of opportunity for them to do just that this season. The fact is that the supporting cast is more comfortable being just that-supporting. That leaves the aforementioned Ross to take on the role of go-to scorer. He?s shown that he has the talent to do just that, but most of his points still came with Thomas on the floor. Meaning, Ross was mostly not the focus of opposing defenses. And even then, while he showed flashes, he was not close to Thomas? equal this season. All of this is to say that Ross has a ways to go to replacing Thomas? production. That?s important. because the gains are likely to come at the offensive end next season. It?s not like this defense can get much better.

The Big Ten thus finds itself with just one seat at the table in basketball?s final weekend. We?ll have some thoughts on what it will take for Michigan to bring home the nets later this week.