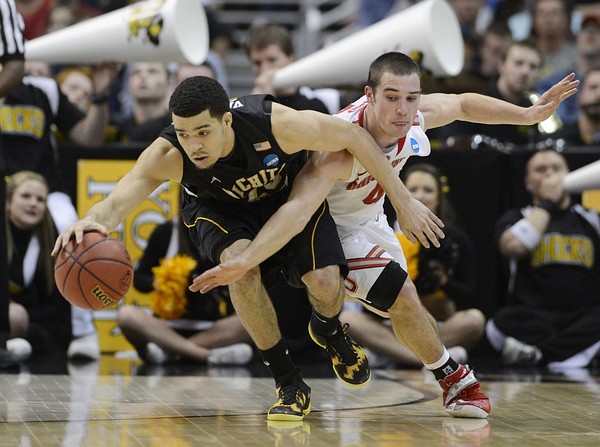 After winning the last two games over Iowa State and Arizona on last-second shots, Ohio State?s luck finally ran out. The Buckeyes dug themselves a hole they couldn?t dig out of vs. Wichita State and saw their 11-game winning skein and season end in the Elite Eight.

Blame it on poor shooting, which plagued the Buckeyes most of the night, particularly in the first half. Ohio State missed its first seven shots and hit just two of its first 10. The Buckeyes shot 24 percent in the first half (8-of-33), trailing by 13 points at intermission-35-22. Wichita State built its lead to 56-36, with 11:28 left in the second half. The Buckeyes finally heated up, cutting the edge to three, 62-59, with 2:49 left. But the Shockers held on, as OSU?s 44 points after intermission weren?t enough.

Now, Wichita State is headed to the Final Four for the first time since 1965. And the Shockers are the first Missouri Valley Conference team in the Final Four since Larry Bird led Indiana State to the title game vs. Michigan State and Magic Johnson in 1979 in an epic showdown in Salt Lake City.

Key moment: Ohio State battled back from a 20-point second-half hole, trimming Wichita State?s lead to 62-59 with 2:49 left. But the Shockers weathered the storm, outscoring the Buckeyes, 8-7, the rest of the way. Four Wichita State players notched double-figures for a team that didn?t win the MVC.

Key player: Deshaun Thomas tried his best, but he was off all night. The junior hit 8-of-20 shots for 23 points and was 0-of-6 from 3-point land-the seventh time this season he failed to drain a 3-pointer. OSU won the other six games. LaQuinton Ross tried to pick up the slack off the bench, notching 19 points as he continued his coming out party this March. But, it wasn?t enough, as Ohio State shot an abysmal 31 percent (19-of-61). Aaron Craft epitomized the Buckeyes? struggles, hitting only 2-of-12 shots with nine points.

Key number: 20, the Buckeyes? 3-point shooting percentage. Ohio State was 5-of-25 from beyond the arc. Conversely, Wichita State hit 40 percent from 3-point land (8-of-20). The Shockers also won the battle of the boards, 49-41. Those were two big keys to OSU?s demise on this night in L.A.

What?s next: Ohio State?s season ends a game shy of the Final Four. Still, it was a successful campaign (29-8) for a club that lost Jared Sullinger and William Buford off of last season?s Final Four squad. The Buckeyes won the Big Ten tourney title and finished second in the regular season. Now, will Deshaun Thomas turn pro? Even if he does, OSU still figures to have a nice nucleus for next season in Aaron Craft, LaQuinton Ross, Shannon Scott, Lenzelle Smith, Jr., Amir Williams and Sam Thompson.