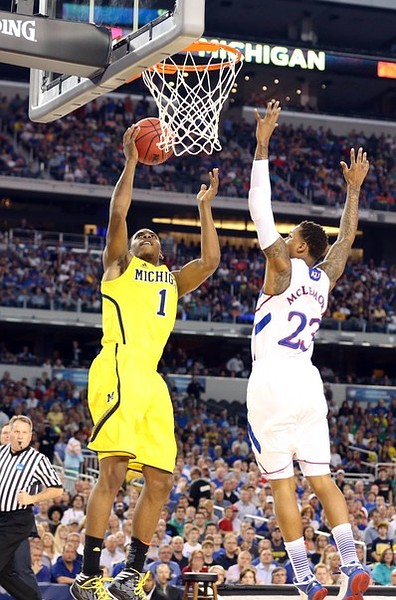 Trey Burke scored all 23 of his points after halftime, including a long, tying 3-pointer in the final seconds of regulation, and Michigan rallied to beat Kansas 87-85 in the South Regional semifinals Friday night.

The fourth-seeded Wolverines wiped out a 10-point Kansas lead in the last 3 minutes of regulation, and Burke gave them their first lead since early in the game with another long 3 to open Michigan's scoring in overtime. Michigan (29-7) reached the regional finals for the first time since the Fab Five era 19 years ago, the last time they were in the round of 16.

VIDEO – Can you believe it!?!? Michigan drains a 30-footer to tie the game. #MarchMadness http://t.co/M1Nk4r8qQf via @MarchMadness

FINAL: Mitch McGary scored 25 points and grabbed 14 rebounds to lift No. 10 Michigan to an 87-85 upset overtime win over No. 3 Kansas on Friday at Cowboys Stadium in Arlington in the Sweet Sixteen. McGary hit a big field goal with 2:15 remaining in overtime, giving Michigan (29-7) the crunch time lead. The Wolverines got solid performances from both McGary and Trey Burke.

McGary knocked down 12-of-17 shot attempts. Burke had 23 points and contributed 10 assists. Michigan trailed 76-71 with 13 seconds remaining in regulation, but a 16-6 run allowed it to take a five-point lead with 52 seconds left in overtime. The Wolverines shot 49 percent from the field (35-of-71). More Michigan scoring came from Tim Hardaway Jr. (10 points), Nik Stauskas (11 points), and Glenn Robinson III (13 points).

Travis Releford contributed 16 points, grabbed five rebounds, had six assists, and went 6-of-10 from the field for Kansas (31-6) in the loss. Kevin Young had a quality shooting game, nailing 6-of-6 shots from the field and scoring 12 points. The Jayhawks hit 55 percent of their field goals (36-of-66). Kansas was hot from long range, hitting 6-of-16 threes for a 38 percent night from beyond the arc. The Jayhawks also got double-digit performances from Jeff Withey (12 points), Elijah Johnson (13 points), and Ben McLemore (20 points).

HALFTIME: No. 3 Kansas took full advantage of the stellar combination of Jeff Withey and Travis Releford, ending the first half against No. 10 Michigan up 40-34. Withey scored eight points, grabbed five rebounds, and shot 4-of-4 from the field. Releford scored eight points, grabbed four rebounds, and had three assists. Trailing 12-11, the Wolverines went cold, going 2:27 without a point while the Jayhawks went on an 8-0 run to open up a nine-point lead.

Kansas got points from eight different players. Through 20 minutes of action, a major weapon for Michigan has been shut down, as Kansas has kept Trey Burke in check. The sophomore enters halftime with zero points, well below his season average of 18.8. The Wolverines applied the pressure in the first half, earning second-chance opportunities with nine offensive rebounds, to just three for the Jayhawks. Michigan played team basketball in the first half, to the tune of nine assists on 14 field goals. Mitch McGary is leading the Wolverines. The freshman has 11 points and five rebounds.

#Michigan isn't going to win if Nik Stauskas and Mitch McGary are its leading scorers. And, that's the case right now.