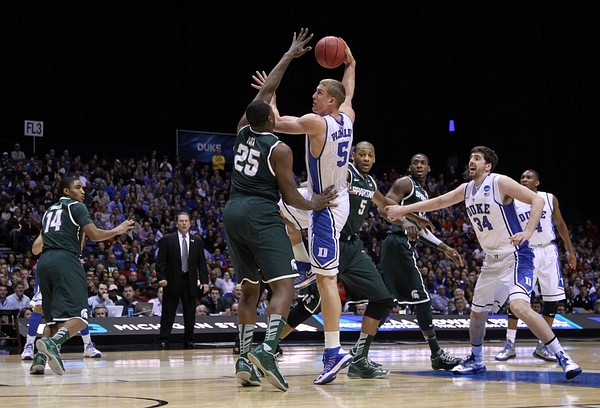 Seth Curry shot Duke right into the regional finals – and put Mike Krzyzewski on the verge of another major milestone. Curry scored 29 points to lead the second-seeded Blue Devils past third-seeded Michigan State 71-61 on Friday night and into the Midwest Regional final. If Duke (30-5) beats top-seeded Louisville (32-5) in Sunday's regional final, Krzyzewski would tie John Wooden's record with 12 Final Four trips. Michigan State (27-9) just couldn't keep up with Curry and Duke's shooters. The Spartans were led by Keith Appling with 16 points and Adreian Payne with 14.

Catch up on all the NCAA tourney action on our NCAA tourney scoreboard and get video, stats and recaps in this post.

FINAL: In a game with several lead changes and momentum swings, No. 6 Duke prevailed over No. 9 Michigan State 71-61 on Friday at Lucas Oil Stadium in Indianapolis in the Sweet Sixteen. There were 10 lead changes in the game. Seth Curry sparked Duke (30-5), as he scored 29 points, pulled down four rebounds, and drilled 6-of-9 three-pointers in the victory.

The Blue Devils were on fire from beyond the arc during the game, shooting 39 percent (7-of-18). Duke shot 24-of-26 from the free throw line. More Duke scoring came from Mason Plumlee (14 points) and Rasheed Sulaimon (16 points). Adreian Payne had 14 points and yanked down 10 rebounds for Michigan State (27-9) in the game. Keith Appling had a quality shooting game, nailing 5-of-8 shots from the field and scoring 16 points.

The Spartans went 18-of-24 from the charity stripe as a team (75 percent). Michigan State lost despite outrebounding the Blue Devils 38-29. Duke trailed 14-10 in the first, but went on an 18-6 run over the next 8:17 to take an eight-point lead. Curry finished the run off with a free throw, which helped Duke lead 32-31 at halftime. The Blue Devils were more on target with their field goal shooting, maintaining a 41 percent (20-of-49) field goal percentage to the Spartans' 40 percent (20-of-50).

HALFTIME: Michigan State went on a 11-4 run to close the gap late in the first half and now trails Duke 32-31. Neither team has been able to take control of the game thus far. The Blue Devils and the Spartans traded the lead eight times in the first half. Duke trailed 18-17 when it broke out for an 8-0 run to overtake Michigan State and seize a seven-point lead. Seven Michigan State players have scored. The Blue Devils' Seth Curry has 14 points and three rebounds. Keith Appling helped the Spartans with nine points.