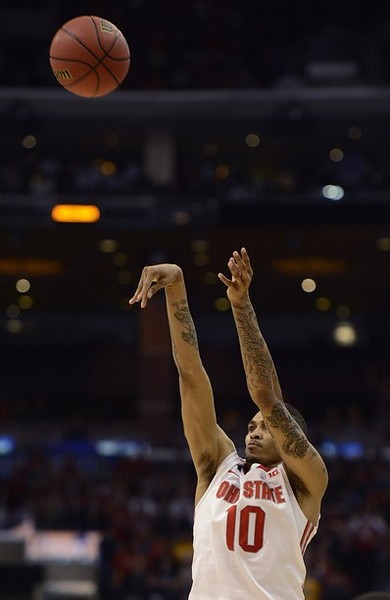 Where were you when LaQuinton Ross hit that impossibly long three-point shot with 2.1 seconds left that propelled Ohio State to the Elite Eight? What a dagger. So, if you are scoring at home, that?s two last-second, game-winning shots in a row by the Buckeyes-Aaron Craft did the honors vs. Iowa State in the third round. Gotta start daily links right there. Here?s a video of Doug Lesmerises of the Cleveland Plain Dealer on the shot heard ?round the Buckeye State.

The great Mitch Albom seems giddy over the fact Michigan and Michigan State are both still in the tourney. Why not? It?s the first time each is in the Sweet 16 together. He likes the chances of each to advance. Me? I?m not so sure. I like the Spartans? chances more than the Wolverines, who don?t have a desirable matchup?

For Michigan State to down Duke, Keith Appling and Branden Dawson must continue to know their roles and play within themselves. That can be easier said than done.

For Appling and Dawson, ?knowing their roles? comes down to probably not scoring much. Two games into this tourney, Adreian Payne, Derrick Nix and Gary Harris are emerging as the offensive options. Appling and Dawson must do other things to contribute: pass, rebound, defend, play with passion.

A big key for Michigan will be how well Wolverines 6-10 freshman Mitch McGary matches up with Kansas 7-foot senior Jeff Withey.

Speaking of McGary, turns out he is a rapper. I?m not making this up. (Believe me, I wish I was.) See for yourself right here.

God bless Indianapolis star columnist Bob Kravitz. He minced no words after Indiana flamed out in the Sweet 16 vs. Syracuse last night.

Kravitz succinctly wrapped up the Hoosiers season thusly: ?The shame is, they could have done so much more. With two All-Americans, two potential NBA lottery picks in Cody Zeller and Victor Oladipo, they should have gone so much further than the Sweet Sixteen. The shame is, there was enough talent there to make a run at the national championship.?

This is what those in the biz call ?spot-on analysis.?

Some raw emotion from Indiana senior and Bloomington native Jordan Hulls-and others–after the loss last night. Yes, this hurt. But Indiana has a bright future.

The search for Tubby Smith?s successor continues. Is Xavier?s Chris Mack a guy? Hmmm. I likey. Speaking of Smith, there are reports he?s talking to Texas Tech about its vacancy.

This is a big spring for Ohio State quarterback Braxton Miller, who is working on fundamentals to take his game to another level. The guy was Big Ten offensive player of the year in 2012. Is there a Heisman in his future? No doubt, if Miller becomes sharper, this Buckeye offense could be out-of-sight in 2013.

Yes, Iowa is coming off a mind-numbing 4-8 season, but plenty of good things are still going on in Iowa City under Kirk Ferentz.

Fans may disagree, as the program has lost 17 of its last 29 games under a coach who is making almost $4 million per season. And some may be miffed that Ferentz has no plans to deviate from what offensive coordinator Greg Davis is doing. Hang in there, Herky.

It isn?t a crazy notion. We got an extended look at the Wolverine attack without ?Shoelace? last season when he was out with injury. And, frankly, it ran well with Devin Gardner, whose superior passing skills give the Michigan attack more balance.

My take: Zeller and junior Victor Oladipo have decisions to make. I think Oladipo will leave. Zeller, a sophomore? I?m not so sure.

My take: This is going to be a fun matchup. Be careful, Buckeyes.

So it's kinda funny. Sometimes teams get hot for March (like Oregon). Sometimes really good teams don't (like Indiana).

My take: Such are the perils of a one-and-done tourney.

Indiana. If you think about it, when is the last time the Hoosiers really looked good? First 32 minutes in East Lansing?

An All-Big Ten Final Four is not happening, officially, with Indiana losing to Syracuse

My take: There still is a chance for three teams, right? Still a big long shot. Heck, even getting two at this point may be difficult.

My take: I was stunned at how many times Zeller had his shot blocked.

Virginia coach Tony Bennett could be getting more attention from Minnesota as a possible #Gophers candidate, per @Charley_Walters

My take: This would be a great get.