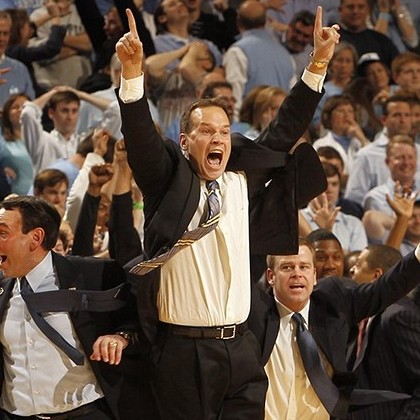 Northwestern hiring of Duke assistant Chris Collins as the school's new men's basketball coach has created a buzz in college hoops circles. Many love his pedigree, youth and energy. Collins sizzles with potential. Do you smell it? Could the thirtysomething wunderkind lead the Wildcats out of the wilderness of basketball hopelessness and to their first NCAA tourney ever? Collins will be hailed a hoop savant if he does so.

But the hire is ripe with risk. The chief one: Collins? lack of head coaching experience. But, hey, what does Northwestern have to lose? Nothing, really, so I say, "Why not take this gamble on Collins?"

Still, it?s very intriguing. The fresh-faced and wide-eyed Collins will cut his teeth against  the likes of Bo Ryan, Tom Izzo, Thad Matta and Tom Crean, among others. That?s quite a playground to learn on.

I went back over the past 20 or so seasons to see where each Big Ten coaching hire was working prior to being tabbed. And Collins is the only hire over that span who was plucked from the outside with no head coaching experience.

Collins may have grown up in Illinois and recruited Chicago, but he'll be new to Northwestern and challenged to build his own way of doing things. And for the first time, too.

Stu Jackson was unique when he was tabbed at Wisconsin (1992-94). Sure, he had never been a college head coach, but he had been head coach of the New York Knicks (1989-90). Jackson was working in NBA personnel when the Badgers tabbed him. Stan Van Gundy (1994-95) was promoted to take over when Jackson when back to the NBA, but Van Gundy had been a head coach at two colleges prior to joining Jackson?s staff in Madison.

Brian Ellerbe at Michigan (1997-2001) is another unique case, being promoted from within but already having head coaching experience.

The bottom line: This Chris Collins hire at Northwestern is going to be fun to watch play out.