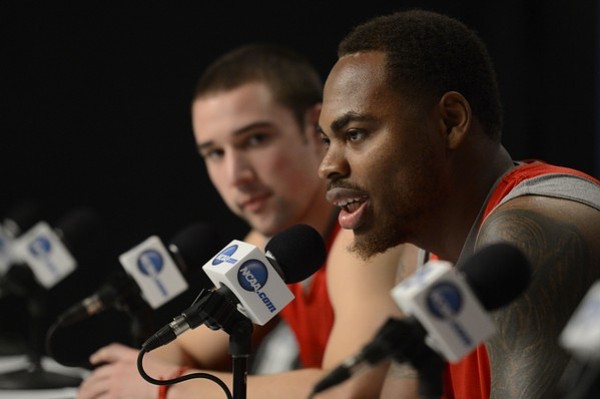 The Sweet 16 kicks off tonight, with No. 2 Ohio State playing No. 6 Arizona in the West and No. 1 Indiana tangling with No. 4 Syracuse in the East. Let?s start daily links there. Each team survived hair-raising third-round games to advance. Are they teams of destiny?

Indiana tries to take its next step to its first Final Four since 2002 tonight vs. No. 4 Syracuse. To advance past the Orange, the Hoosiers must solve Jim Boeheim?s famed 2-3 zone. It?s a vexing proposition.

As the Indianapolis Star?s Terry Hutchens points out, this isn?t a zone that packs the middle, takes away post options and begs teams to beat them from outside. Quite the opposite. Syracuse?s zone uses big guards with length and ability to contest shots. They move quickly, causing turnovers by trapping on the wing and in the corners. And they don?t allow easy shots. The Orange ranked third nationally in field goal percentage defense and sixth defending three-pointers.

Many people-me included-like the Buckeyes? chances to march on to the Final Four. Here are four things Doug Lesmerises of the Cleveland Plain Dealer thinks about the OSU-Arizona tilt.

Keep an eye on athletic Arizona 7-foot freshman Kaleb Tarczewski. He could pose issues for the Buckeyes, winners of 10 in a row. A story within the story will be Thad Matta clashing with Arizona coach Sean Miller, an old pal. Each coached Xavier, Matta handing the reins to Miller when he left for Columbus.

Northwestern made official what many knew was coming, naming Duke assistant/wunderkind Chris Collins head coach. Herb Gould of the Chicago Sun-Times thinks the kid could be the coach to turnaround NU.

No doubt, Wildcats A.D. Jim Phillips ?won the press conference,? as the hire is being widely praised. But, winning press conferences doesn?t mean squat. Let?s check back in March 2014, as Collins is inheriting a team with lots of talent and potential. What will he do with all of that in his debut? Fascinating.

Graham Couch of the Lansing State Journal hits on a lot of good points in a recent blog. Among other things, Couch offers his take on the likelihood of each remaining Big Ten team reaching the Final Four.

No doubt, the clash of big men likely is the key matchup in this game. Can McGary avoid foul trouble and stay on the floor? That will be pivotal for the No. 4 Wolverines vs. the No. 1 Jayhawks.

Iowa beat Virginia last night and is headed to its first NIT final four ever. Check out the reactions of some Hawkeyes in this video.

And here is a nice photo gallery of Iowa?s win in Charlottesville, where UVa had a 19-game winning skein. I already am excited about Iowa for next season. Could the Hawkeyes be a preseason Big Ten fav in 2013-14?

With VCU?s Shaka Smart out of the equation-he recently inked an extension–what direction will Minnesota go in its quest to replace Tubby Smith?

Ameila Rayno of the Minneapolis Star-Tribune thinks closure to this issue could come quickly. Among the remaining top targets, her best-case scenario hire: Marquette?s Buzz Williams, who she describes as ?get-able.? Lots of other good stuff in here.

OK, Michigan fans: You may want to sit down before reading this. Kyle Meinke of MLive.com poses this question: Could Devin Gardner be the next Colin Kaepernick? Before you spit your Fruity Pebbles across the table, know that it?s not too crazy of a notion. Listen to Michigan offensive coordinator Al Borges.

They are now. Look at Russell Wilson, Cam Newton in addition to Kaepernick.

Marc Morehouse of the Cedar Rapids Gazette scrutinizes the first Iowa two-deep of 2013. I trust it?s in pencil.

No, you aren?t seeing things. This is no fullback position. But there is a Y back. Head coach Kirk Ferentz said Wednesday the fullback position isn?t dead. Writes Morehouse: Iowa will mix and match personnel groups the spring, trying to get a feel for what works best and who fits where. No matter, the offensive slogan for 2013 is basic: ?Make a play." That happened too infrequently last year, which was a big reason why the Hawkeyes went 4-8.

Nebraska defensive end Jason Ankrah plans to break out in 2013. Well, that?s good. Because the Cornhuskers? defensive line is a major issue and needs playmakers.

Defensive end Deion Barnes is coming off a terrific freshman season and projects to have a special career at Penn State. He still has the option to transfer to another school and play right away because of NCAA sanctions levied against Penn State. But Barnes explains in this video why he plans to be true to the Nittany Lions. C?mon, let?s all hum the Penn State fight song together and head down to the Creamery for a scoop.

QB Martinez impressing Pelini w/accuracy this spring. After couple ints. in first practice or two, "I don?t think he has thrown one since"

My take: I think we all can agree: a more accurate Martinez is a more deadly Martinez. Am I right, people?

BYU is the only team in the NIT Final Four with a winning record in its conference, 10-6 in the West Coast Conference.

My take: This is why it?s the NIT.

Said couple days ago and again today that the #Gophers short list was Smart, Williams, Stevens and Hoiberg. Smart is off. Buzz is coaching.

My take: If Minnesota can get any of these guys, it would be a coup.

Chris Collins entered search as favorite. Won #Northwestern over by Monday. Will be announced in a matter of minutes. This is their guy.

My take: The timing is strange, officially releasing the info late on Wednesday night on the eve of the Sweet 16. Making the news get lost even more: The Bulls ended the Heat?s 27-game winning skein.