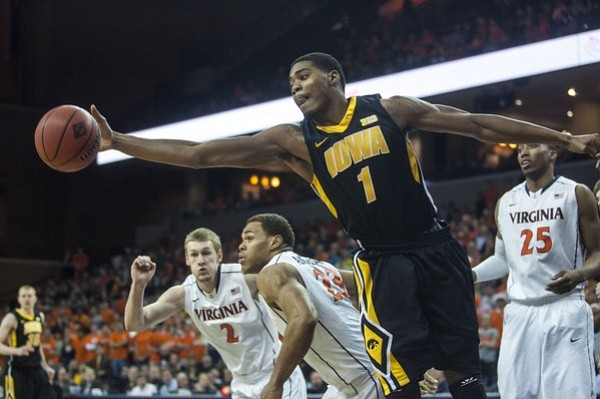 On to MSG with my family .. #Hawkeyes

FINAL: Devyn Marble scored 24 points and Adam Woodbury added 10 points and eight rebounds Wednesday to lead Iowa to a 75-64 victory at Virginia and into the NIT semifinals. Zach McCabe shot 4-of-6 from the field and scored 10 points for the Hawkeyes. Iowa shot 49 percent from the field (26-of-53), including 50 percent from downtown (8-of-16). Justin Anderson scored 24 points, grabbed six rebounds, and went 5-of-8 from beyond the arc for Virginia (23-12), which had won its last 19 home games. The Cavaliers also got solid contributions from Joe Harris (11 points) and Mike Tobey (15 points). Iowa won the rebounding battle en route to victory, pulling down 34 boards to 28 for Virginia.

HALFTIME: Devyn Marble scored nine points and Mike Gesell added seven to lead Iowa to a 31-28 halftime lead over Virginia. Trailing 13-11, the Cavaliers went cold, going 3:20 without a point while the Hawkeyes went on an 8-0 run to open up a 10-point lead. Virginia, which has won 19 straight at home, made it rain from long range, shooting 55 percent (6-of-11). Justin Anderson paced Virginia with nine points and three rebounds.