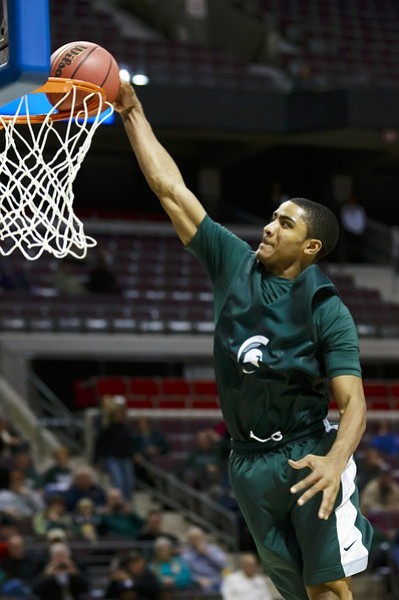 The Sweet 16 starts tomorrow, with four Big Ten teams vying to all reach the Final Four. Wouldn?t that be something? But before we dig in on that, it looks like Northwestern soon will hire a hoops coach. Maybe as soon as today.

Duke assistant Chris Collins never has been a head coach. But, honestly, what does Northwestern have to lose? Exactly.

On to the NCAA tourney. ?

HARRIS AT HOME: Michigan State guard Gary Harris not only is excited about playing in the Sweet 16. He?s also extra pumped because his region has taken him to Indianapolis, a city he grew up just outside of.

And-get this-Harris has played in Indy?s Lucas Oil Stadium before-as a high school football player. Now, he?ll wear shorts and play No. 2 Duke with a possible clash with No. 1 Louisville for a spot in the Final Four on the line. Who says dreams don?t come true?

HOW TO BEAT DUKE: Speaking of Michigan State, Mike Griffith of MLive.com has five keys to the Spartans toppling Duke.

If I?m the Spartans, I?m worried about guard play. Will Keith Appling hit some shots and take care of the ball? Is he healthy? If not, MSU will be sunk.

His No. 1 is a Big Ten team. Guess who? But the next Big Ten squad doesn?t come in until No. 6-Ohio State. Too low? Yes. Has DeCourcy not seen the shambles that is the West Region? Does he not know the Buckeyes have won 10 games in a row? Oh, well.

TONS OF TALENT: Having your players viewed as pro prospects is a good thing. Really. Ask Michigan coach John Beilein. Why? Well, it means you have some pretty good players.

How many pro prospects does Michigan have? Well, there?s Trey Burke, Tim Hardaway, Jr., Glenn Robinson III and Mitch McGary. Am I missing anyone?

STRIKES AGAINST TUBBY: Tubby Smith?s firing after six seasons at Minnesota wasn?t all about NCAA tournament shortcoming (one win in three trips) and an atrocious Big Ten record (46-62). It seems recruiting and fundraising were factors.

Now, who will want the job?

It seems like Minnesota has as good a shot at landing Phil Jackson as it does Shaka Smart.

PLAY FOR MILES: Nebraska?s season is over. Now, Tim Miles needs to bolster his roster after an oh-so-promising debut. And he?s zoning in on three recruits with the spring signing period fast approaching on April 17.

One is a former Michigan walk-on: Sai Tummala, who is at a Utah JC right now. While in Ann Arbor, Wolverines coach John Beilein said of Tummala: ?He may be our most athletic player. Aside from maybe Trey Burke (this year?s Big Ten player of the year), he?s one of our quickest players.?

PUTTING A BOW ON ILLINI SEASON: Loren Tate of the Champaign News-Gazette pens the epitaph of the Illinois hoop season. And, for Tate, it?s a sad, familiar ending.

But Tate notes Illinois does hold some NCAA tourney distinctions.

WATCH THESE NITTANY LIONS: Bob Flounders of the Harrisburg Patriot-News takes a look at which young Penn State players will make the biggest impacts this spring.

SOME TOUGH DATES: Dustin Hockensmith of PennLive.com already is breaking down non-conference football schedules. Really. And he says Penn State?s is among the toughest in the Big Ten.

Penn State and Michigan are the lone Big Ten teams that play an all-FBS schedule. But, take a closer look at the Nittany Lions? non-league games in 2013.

While all these schools are ?FBS,? they hardly are daunting foes.

NELSON'S READY TO COMPETE: There are several interesting quarterback situations to watch during spring drills. One is at Minnesota, where Philip Nelson won?t say the job is his despite turning some heads as a true freshman last season.

True freshman Chris Streveler already is on campus, trying to impress. And redshirt freshman Mitch Leidner also is in the mix. Stay tuned. This could be interesting.

I guess blood isn?t thicker than water-at least for some. Bizarre.

Shaka turned down Illinois last year, he apparently isn't even going to give Minnesota the chance to let him say no.

This isn?t good news for Goldy.

I've maintained all season the basketball player I'd like to see play football is Branden Dawson. Or Oladipo.

How about Mitch McGary? Or Derrick Nix?

East Region No. 2 Miami will be without 6-10 Reggie Johnson this weekend because of what the school calls a ?lower extremity injury."

This is fantastic news for Indiana.