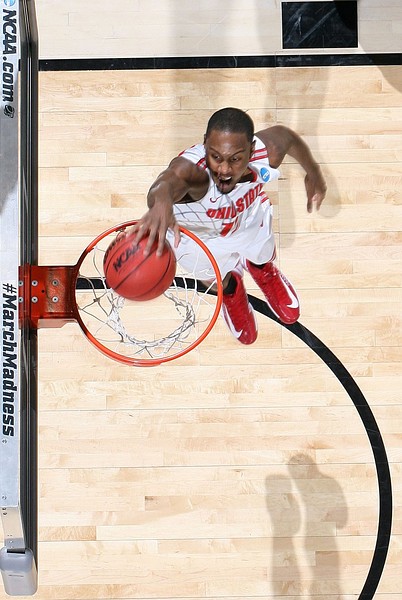 The Buckeyes reside in the wild West, where the 3, 4, and 5 seeds all went down in the second round, and the 1 seed bowed out in the third round. That leaves the winner of this crucial game as the favorite to reach the final four from the region. While Arizona is indeed a quality team, currently ranked 15th by KenPom, the reality is that the Wildcats have not beaten a team currently ranked better than 49th in KenPom since Christmas Day. In fairness, Arizona has only played one such game in that stretch, due to the mediocrity of the Pac 12, but the fact that the Wildcats have nonetheless lost seven times over that stretch speaks to their vulnerability.

Still, this is a good Arizona team, and for the first time all season, the perpetually-overrated Wildcats might actually be underrated: KenPom projects Ohio State to defeat Arizona by a 69-65 score in 65 possessions. The fact that the Wildcats are projected to score a point per trip on the Buckeyes speaks to their strength on the offensive end, which is driven by an accurate, perimeter-oriented attack that also has the bonus ability of crashing the offensive glass. This is a long Arizona team, and Ohio State will have to work to prevent second chances. On the perimeter, Xavier transfer Mark Lyons dominates the action, and he is indeed a potent scorer thanks to an intelligent shot distribution, shown at right. Lyons doesn't take many two-point jumpers, and the same is true (to a lesser extent) of the Wildcats in general.

This is consistent with Miller's pack-line approach, which has also allowed his Arizona teams to be quite good at limiting three-point looks. This season, the Wildcats have seemingly caught some bad luck with regards to opponent threes (a whopping 35 percent conversion rate, compare to 29 percent the past two seasons), which means that Arizona's defense is likely better than its current KenPom ranking of 32nd. The Buckeyes will not find three-pointers easy to come by, and the Wildcats also do a good job of defending the paint with their length. Ohio State's sparkling NCAA tournament efficiency is going to take a hit, simply because Arizona's defense is so much better than that of Iona or Iowa State.

Still, I like the Buckeyes in this matchup for two big reasons–Aaron Craft and Shannon Scott. Mark Lyons and, to a lesser extent, Nick Johnson are the drivers of the Arizona offense, and I think Ohio State's outstanding perimeter defenders can shut them down. The Wildcats will have an advantage on the interior with seven-footer Kaleb Tarczewski, but the talented freshman has been a reluctant scorer most of the season.

I expect this game to be close and hard-fought, but I like the Buckeyes to pull it out by single digits.

As with any game involving Syracuse, the conversation immediately shifts to scoring on the Orange's 2-3 zone. Every season, Syracuse ends up among the nation's leaders in block percentage and opponent three-point attempt percentage thanks to a group of long, rangy athletes playing a 2-3 zone. Simply put, you are not going to get a lot of easy looks on the interior against the Orange, making this matchup very interesting when it comes to Cody Zeller.

In the tight win over Temple, the Hoosiers were clearly looking to play through their talented seven-footer, which worked out a lot worse than you'd expect. Zeller used a whopping 42 percent of Indiana's possessions at a lowly efficiency, thanks to four of 10 shooting and six turnovers. Despite the bad game, going to Zeller remains a good strategy, albeit one will be more difficult to employ against the elite shotblockers of Syracuse. Where Zeller might make a larger impact is on the offensive glass, as Syracuse always struggles to rebound out of the zone.

Indiana's offensive philosophy as a team will be put to the test in this matchup. The Hoosiers under Tom Crean have always been persistent at driving to the rim. When the talent level was low early in the rebuild, this led to Indiana leading all of D1 in percentage of its shots blocked, and that numbers remains high even now. You could look at this matchup in two ways. One, if Indiana stays true to its approach against the Syracuse zone, it will simply get rejected over and over, stifling its offense. Alternatively, this approach could be just what cracks the zone, as penetration can get players out of position and open up even more offensive rebounding opportunities as the Syracuse bigs sell out for blocks.

I personally take the latter view and expect Indiana to win this one by more than the four points projected by KenPom. The Hoosiers have enough weapons to navigate the Syracuse zone, and I don't think the Orange have the shooters to keep up at the other end. My only reservation about this game is Syracuse's offensive rebounding ability, which could cause some major problems for an Indiana team that was mediocre on the glass in conference play. If the Hoosiers don't get absolutely destroyed on the Orange's offensive glass, I see a comfortable victory.