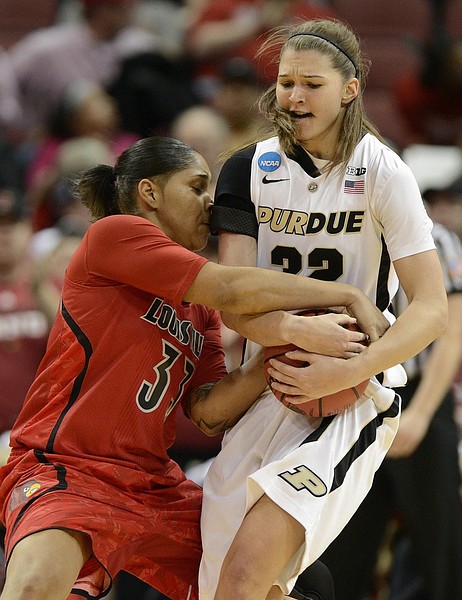 Louisville 76, Purdue 63: BOX | AP RECAP
Sara Hammond had 21 points and 10 rebounds to help fifth-seeded Louisville beat Purdue 76-63 Tuesday and advance to its second NCAA tournament regional semifinal in three years. The Cardinals (26-8) will play either top-seeded Baylor or Florida State on Sunday. The fourth-seeded Boilermakers (25-9) snapped a five-game winning streak and have lost in the second round three straight years.

Notre Dame 74, Iowa 57: BOX | AP RECAP
Kayla McBride scored a career-high 28 points and top-seeded Notre Dame advanced to the regional semifinals of the women's NCAA tournament with a 74-57 win over Iowa on Tuesday night. Skylar Diggins had 16 as the Fighting Irish (33-1) extended their school-record winning streak to 28 games and finished 13-0 on the road. Notre Dame will next face 12th-seeded Kansas in Norfolk, Va., on Sunday. Bethany Doolittle scored 16 points for Iowa (21-13), which went 0 for 11 from 3-point range and had 21 turnovers.

LSU 71, Penn State 66: BOX | AP RECAP
Adrienne Webb scored a career-high 29 points, including two crucial free throws with 22 seconds left, and LSU beat third-seeded Penn State 71-66 in the second round of the NCAA tournament on Tuesday night. Webb, a senior, was 10 of 16 in what would have been her last game had No. 6 seed LSU (22-11) lost. Instead, she carried LSU to the Spokane Regional semifinal. Nikki Greene scored 16 points and Alex Bentley 14 for Penn State (26-6), whose loss meant all four No. 3 seeds were out of the tournament.

Stanford 73, Michigan 40: BOX | AP RECAP
Joslyn Tinkle Tinkle made a career-high five 3-pointers on the way to 21 points, and top-seeded Stanford used a spectacular perimeter shooting performance to rout No. 8 seed Michigan 73-40 to advance to the Spokane Regional semifinals on Tuesday night. Jenny Ryan scored 11 points in her final college game to lead Michigan (22-11), which matched its second-lowest scoring output all season .