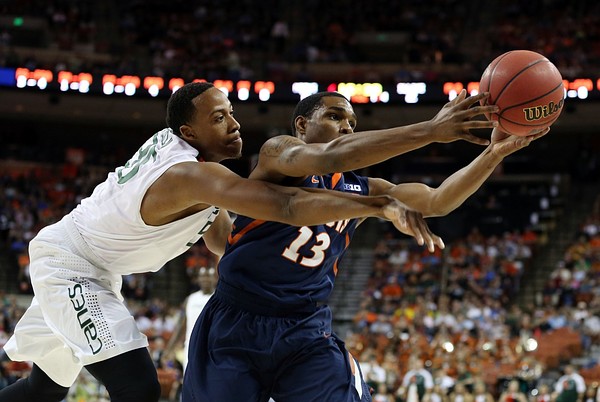 Shane Larkin hit a go-ahead 3-pointer with a minute left and Miami kept possession on a ball knocked out of bounds that probably should have gone to Illinois, helping the Hurricanes hold on for a 63-59 victory Sunday night to advance to the NCAA round of 16.

After Larkin's first field goal in about 9 1/2 minutes, D.J. Richardson missed a 3-pointer. In the fight for the rebound, the ball appeared to ricochet off the hands of Miami's Kenny Kadji out of bounds. But the Hurricanes kept the ball, and Durand Scott made two free throws after that.

Why Illinois lost: The Illini were relentless in all facets, playing great defense and making almost all the hustle plays. Illinois did an especially good job bottling up Miami guard Shane Larkin, who struggled to find a groove and often had to settle for poor shots. He hit just 5-of-12 shots and had 17 points with three turnovers. But Illinois shot just 37 percent (23-of-61) and struggled from beyond the arc, hitting 25 percent (7-of-27).

Key moment: Illinois led, 55-54, when Miami guard Shane Larkin drained a long 3-pointer to give the Hurricanes a 57-55 lead with 1:01 remaining. That proved to be the dagger that ended the hopes of the Fighting Illini, as Miami hit its free throws down the stretch to ice the game and move on to the Sweet 16 to take on No. 3 Marquette. It?s the Hurricanes? first trip to the Sweet 16 since 2000. Credit coach Jim Larranaga, who guided George Mason to the 2006 Final Four.

Key player: Brandon Paul asserted his will in the second half and had a strong game in his last effort in an Illinois uniform. The senior hit 8-of-20 shots and finished with a team-high 18 points. But fellow senior guard D.J. Richardson struggled on offense, hitting only 1-of-11 shots and notching just five points.

Key number: 7, free throws shot by Illinois. The Fighting Illini hit six of them. But Miami hit 10-of-15 free throws, which proved to be a big difference in this game.

What?s next: An up-and-down Illini season ends with a 23-13 mark. A senior-dominated team finished 8-10 in the Big Ten, suffering high-highs (wins over Gonzaga, Butler, Indiana and Ohio State) and low-lows (losses to Purdue, Iowa and Northwestern). Illinois did notch an NCAA win over Colorado after Illinois entered the Big Dance having lost four of six games, as John Groce showed promise in his debut season in Champaign.

FINAL: No. 2-seed Miami  trailed in the waning moments of Sunday's game, but took the lead for good on a field goal by Shane Larkin with with 1:01 to go and hung on for a 63-59 triumph over Illinois at Frank Erwin Special Events Center in Austin in the third round of the NCAA Tournament. Rion Brown picked up the offensive burden for Miami (29-6), finishing with 21 points, four rebounds, and 7-of-13 shooting from the field. Other Miami (FL) scorers in double figures included Kenny Kadji (10 points) and Larkin (17 points). Nnanna Egwu contributed 12 points, yanked down 12 rebounds, and knocked down 5-of-9 shot attempts for Illinois (23-13) in the game. The Fighting Illini struggled from the floor, shooting 38 percent (23-of-61). Illinois grabbed 16 offensive rebounds. The Fighting Illini also got double-digit games from Tyler Griffey (12 points) and Brandon Paul (18 points).

HALFTIME: No. 7 Illinois is down 29-26 to No. 2 Miami (FL) at the half despite a big game so far for Tyler Griffey. In the first 20 minutes, Griffey scored nine points and grabbed six rebounds. Brandon Paul added eight points and three rebounds for the Fighting Illini, who led 18-14 when the Hurricanes went on a 9-0 run to take a five-point lead. Shane Larkin scored eight points and dished out four assists to lead Miami.