Quick Hit: It wasn't pretty, but Indiana got it done 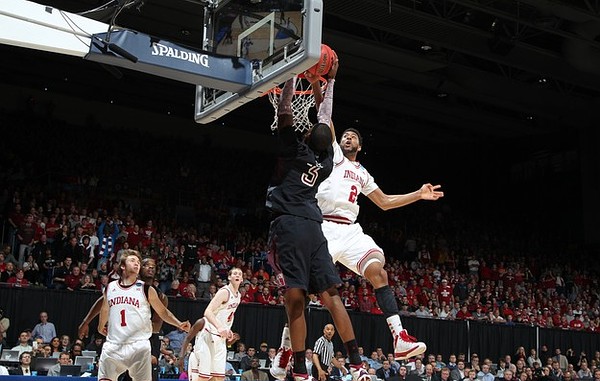 Sometimes a team just has to survive and advance. That was the case Sunday for East Region No. 1 seed Indiana, which trailed almost the entire second half before rallying in the final minutes to dispatch No. 9 seed Temple and advance to its second consecutive Sweet 16.

Read more about the game:

Why Indiana won: It wasn?t pretty, but Indiana found a way to grind out a victory when it didn?t play its best. Often times, the Hoosier offense was discombobulated and out of synch. But Indiana found a way to get to the free-throw line, hitting 16-of-20 from the charity stripe. That basically was the difference. And don?t discount the Hoosier defense, which limited Temple to 34 percent shooting (21-of-61) and 13 percent from 3-point range (3-of-23). Indiana had not won a game while scoring fewer than 60 points all season. Its fewest in a win to date were 66 in a win over Georgia on Nov. 19 in the Progressive Legends Classic in Brooklyn. Today was all about finding a way to win, survive and advance. All eventual national champs must pass tests like this along the way. Credit Indiana for being resilient in the face of adversity when it could have buckled.

Key moment: This was a back-and-forth game that Indiana never could get a hold of. The Hoosiers trailed at halftime, 29-26, and didn?t lead in the second until a Victor Oladipo free throw made it 53-52 with 1:19 left. Then, after a Temple miss, Oladipo came down and hit a 3-pointer to give Indiana a four-point lead with 14 seconds to go. Ball game.

Key player: It has to be Victor Oladipo, who hit 7-of-12 shots and finished with a team-high 16 points and eight rebounds. The junior also played great defense in the second half on Temple?s Khalif Wyatt. The Owls star had 20 points at halftime but just 11 in the second half. Credit Oladipo, the Big Ten defensive player of the year who helped pick up the slack as Jordy Hulls dealt with a shoulder injury and Yogi Ferrell didn?t score and had three turnovers.

What?s next: Indiana will play No. 4 Syracuse in the Sweet 16 in Washington, D.C. This is the Hoosiers second trip in a row to the Sweet 16.