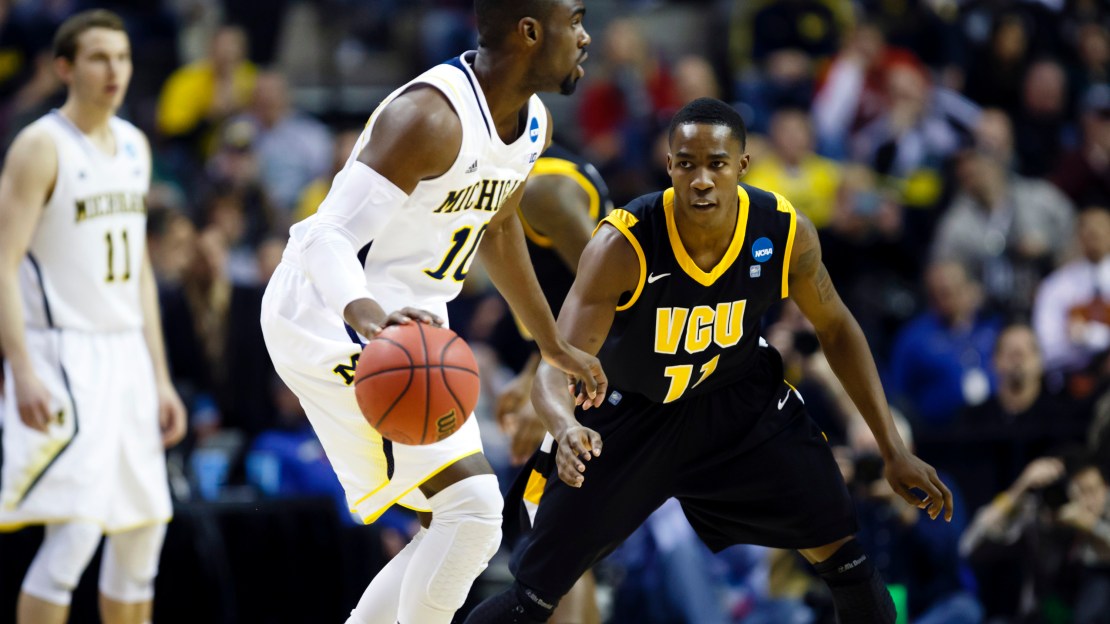 Mitch McGary had 21 points and 14 rebounds, and fourth-seeded Michigan breezed through VCU's vaunted pressure with a clinical performance Saturday, beating the fifth-seeded Rams 78-53 to advance to the NCAA round of 16 for the first time since 1994.

Trey Burke and Tim Hardaway Jr. rarely looked rattled against VCU, and although Michigan (28-7) committed 12 turnovers, the Rams couldn't turn many of them into quick scoring opportunities.

McGary, a 6-foot-10 freshman, set season highs in scoring and rebounding. VCU had no answer for him around the basket, and when the Rams couldn't create easy baskets with their pressure, they were finished.

FINAL: Mitch McGary scored 21 points, on 10-of-11 from the field, and grabbed 14 rebounds to lift No. 10 Michigan to a 78-53 win over Virginia Commonwealth on Saturday at The Palace of Auburn Hills in Auburn Hills. Glenn Robinson III scored 14 points, pulled down nine rebounds, and went 7-of-10 from the field to help Michigan to its first Sweet 16 since 1994. The Wolverines shot 52 percent from the field (31-of-60) and also grabbed 12 offensive rebounds. More Michigan scoring came from Trey Burke (18 points) and Tim Hardaway Jr. (14). The Wolverines won the battle on the boards (41-26) and made more free throws (10) than VCU attempted (6).

HALFTIME: Mitch McGary scored six points and grabbed nine rebounds as No. 10 Michigan leads VCU, 38-23, at the half. Trey Burke (11 points, 4 assists) and Glenn Robinson III (10 points, five rebounds) each also had big first 20 minutes for Michigan, which outbrebounded VCU, 25-15. Michigan has been effective inside, making 12-of-19 two-point field goals, but the Wolverines have struggled on the perimeter, shooting 3-for-12 from three-point range. Treveon Graham led Virginia Commonwealth in the first half, with nine points.