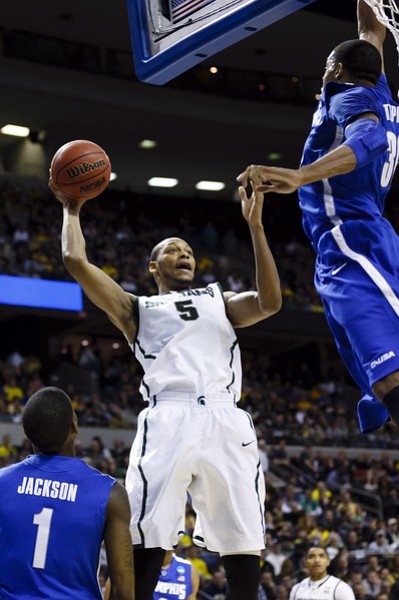 For the fifth time in the last six seasons, Tom Izzo and Michigan State are headed to the Sweet 16. The Spartans clinched their latest regional semifinal berth by dispatching Memphis, 70-48, Saturday afternoon.

Why Michigan State won: This wasn?t pretty, but it was a methodical win for Michigan State, which used its muscle, size and mite to dominate in the paint with players like Derrick Nix and Adreian Payne. The imposing Spartans also imposed their will on Memphis, limiting the Tigers to 31-percent shooting and winning the battle of the boards, 50-32. The early hot shooting by Gary Harris sparked Michigan State in the first half, as the Big Ten Freshman of the Year played a good game. The only bad news: MSU point man Keith Appling missed an extended stretch with a shoulder injury. Travis Trice and Denzel Valentine did a good job running the team, but will Appling be OK?

Key moment: MSU had a 13-point lead in the first half, but Memphis used a 16-6 run to finish the opening 20 minutes and close the gap to 32-29 at halftime. But the Spartans recovered to built their lead back to 14 with 11:50 left, taking a 45-32 advantage. Michigan State cruised home from there, using timely shooting and tough defense.

Key player: Gary Harris came out on fire, hitting four of his first six 3-point shots. The freshman phenom battled foul trouble for most of the second half but still finished with 23 points on 6-of-10 shooting (4-of-8 from beyond the arc) and was the team?s primary offense early in the game. Also have to mention Adreian Payne, who played a standout game. The junior finished with 14 points and had a team-high 11 rebounds, to go along with five blocks. Payne?s defense was outstanding, as Memphis had just 19 points in the second half.

Key number: 49, Michigan State?s shooting percentage. Time and again, MSU got the ball inside for easy hoops. And when the Spartans missed a shot, they often were there for the rebound and put-back.

What?s next: Michigan State will play the winner of the No. 2 Duke vs. No. 7 Creighton game in the Sweet 16 in Indianapolis. This will be Tom Izzo?s 11th trip to the Sweet 16.