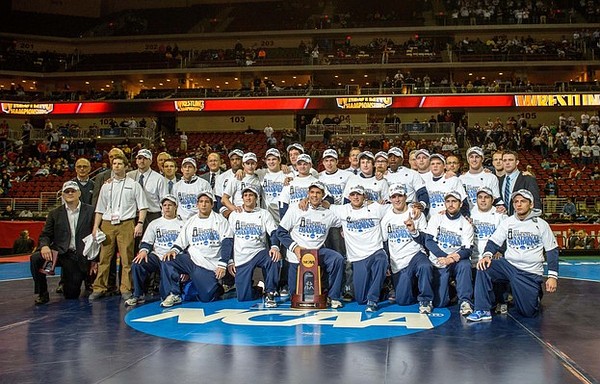 Ruth claimed the 184-pound title to give Wright the opportunity to clinch the team crown with a victory in the 197-pound class. And Wright didn't disappoint, taking the individual title to seal his perfect season (32-0) and the Nittany Lions' third consecutive national championship.

[GALLERY: View some of the best Big Ten shots from the Championships ]

ILLINOIS
University of Illinois Fighting Illini sophomore Jesse Delgado won the NCAA title at 125 pounds with his 7-4 decision over No. 4 seed Nico Megaludis of Penn State. The Illini's title is the first ever at that weight in school history. The squad finished ninth with 45.5 points and crowned three All-Americans including Conrad Polz (165) and Jordan Blanton (174). Read full FightingIllini.com recap.

INDIANA
Taylor Walsh, Ryan LeBlanc and Adam Chalfant's 2012-13 seasons came to an end on Day Two of the NCAA Championships, each concluding their second consecutive trips to the nationals. All three advanced to the championship round of 16 before bowing out. LeBlanc finishes his redshirt junior campaign at 24-10 overall, including six pins, four major decisions and a tech fall. Read full IUHoosiers.com recap.

IOWA
University of Iowa wrestler Derek St. John became the 52nd national champion in program history following a 3-2 decision over Northwestern's Jason Welch in the finals of the 2013 NCAA Championships. St. John, a three-time All-American and 2012 NCAA runner-up, put together five straight wins to climb to the top of the 157-pound bracket and claim his first career national crown. Read full HawkeyeSports.com recap.

MICHIGAN
With its final six representatives eliminated from competition, the University of Michigan wrestling team saw its 2012-13 season come to an end on the second day of competition at the NCAA Championships on Friday (March 22) at Wells Fargo Arena. Read full MGoBlue.com recap.

MINNESOTA
Tony Nelson is a two-time national champion. Capping off a great showing by the Gophers at the 2013 NCAA Wrestling Championships, Nelson defeated Northwestern's Mike McMullan on the platform by a score of 6-2 to win his second title in as many years. With a team total of 103 points, Minnesota finishes third in the team race. Penn State won its third straight title with 123.5 points. Read full GopherSports.com recap.

PURDUE
The Purdue wrestling team turned in a 31st-place finish at the 2013 NCAA Wrestling Championships over the week, led by senior Ivan Lopouchanski's seventh-place All-America showing at 149 pounds. The Boilermakers scored 11 team points over the three-day tournament and turn in their first All-American since the 2010 season. Read full PurdueSports.com recap.

WISCONSIN
Wisconsin's Tyler Graff capped his run through the 2013 NCAA Wrestling Championships with a win in the 133 lbs. match Saturday, defeating Edinboro's A.J. Schopp, 6-3, for the bronze medal. The third-place title marks Graff's highest career finish at the NCAA championships. He leaves Des Moines on a winning note as a three-time All-American in his first three seasons of collegiate competition. Read full UWBadgers.com recap.