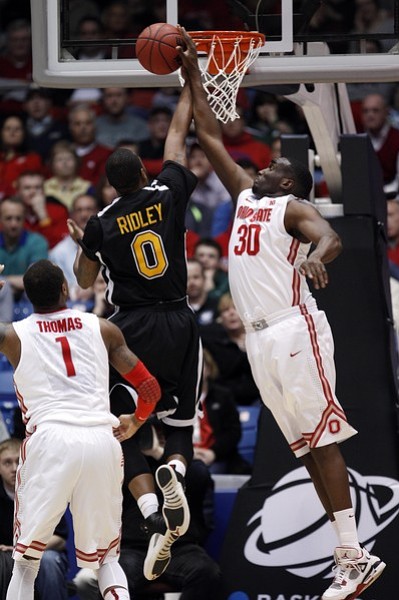 Sam Thompson had career highs with 20 points and 10 rebounds on Friday night, part of a dominating performance by Ohio State's front line, and the Buckeyes ran away to a 95-70 victory over Iona in the second round of the West Regional. The second-seeded Buckeyes (27-7) are in prime March form with nine straight wins, including their last five games of the regular season and a run to the Big Ten tournament title.

FINAL: Sam Thompson scored 20 points and grabbed 10 rebounds to lift No. 7 Ohio State to a 95-70 win over Iona on Friday at University of Dayton Arena in Dayton in the second round of the NCAA Tournament. Both Thompson and Deshaun Thomas played well for Ohio State (27-7). Thompson knocked down 6-of-10 shot attempts. Thomas contributed 24 points, grabbed three rebounds, and went 8-of-13 from the field. The Buckeyes shot 48 percent from the field (34-of-71).

Ohio State was hot from long range, hitting 7-of-16 threes for a 44 percent night from beyond the arc. The Buckeyes were tough on the offensive boards, grabbing 16. Ohio State also got double-digit contributions from Evan Ravenel (11 points) and Lenzelle Smith, Jr. (12 points). David Laury scored 14 points, yanked down eight rebounds, dished out five assists, and made 6-of-10 shots from the floor for Iona (20-14) in the game. The Gaels struggled from the floor, shooting 35 percent (23-of-65).

Iona also got double-digit performances from Sean Armand (17 points) and Tavon Sledge (20 points). The Buckeyes won the rebounding battle en route to victory, pulling down 47 boards to 40 for the Gaels. Ohio State pushes its winning streak to nine games and breaks Iona's five-game winning streak with the victory.

HALFTIME: Ohio State took full advantage of the stellar combination of Sam Thompson and Deshaun Thomas, ending the first half against Iona up 43-33. Thompson scored 10 points, grabbed five rebounds, and shot 3-of-5 from the field. Thomas scored 13 points. The Gaels trail in spite of David Laury's 12 points, five rebounds, and three assists. The Buckeyes trailed 6-5 when they broke out for a 15-0 run to overtake Iona and seize a 14-point lead. Ohio State distributed the ball well, with 12 assists on 16 field goals in the first half. Eight Ohio State players scored in the half. The Gaels shared the ball, finishing with eight assists on 12 field goals in the first half.